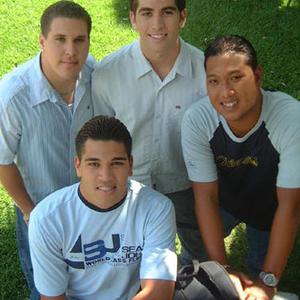 The Opihi Pickers are one of Hawaii's favorite recording stars whose blend of island and contemporary music has proved a favorite with music lovers of all ages. Led by producer, composer, vocalist and ukulele virtuoso Imua Garza, the Opihi Pickers have grown and matured over the years while developing an original fresh sound and style. Imua's brother Hoku Garza (guitar), their cousin Kahale Morales (bass) and Kevin Okimoto (guitar and vocals) round out the group, each bringing their own unique flavor to their music.

Led by producer, composer, vocalist and ukulele virtuoso Imua Garza, the Opihi Pickers have grown and matured over the years while developing an original fresh sound and style. Imua's brother Hoku Garza (guitar), their cousin Kahale Morales (bass) and Kevin Okimoto (guitar and vocals) round out the group, each bringing their own unique flavor to their music.

Their new CD, Together As One, is their fourth effort and with it they continue to dazzle island music lovers with fresh original songs, strong vocal harmonies and solid musical arrangements. A music video for "Our Love Is Divine," a popular song from the CD, is available on the music video DVD compilation, Overdrive Live Volume 2.

The group recorded their first CD, Fresh off the Rocks, while they were in their early teens. Their youthful good looks and enthusiastic live performances garnered them a loyal following and they soon became local favorites for backyard parties, community events and special occasions.

Their second CD, Beginnings, was released in 2001 and spawned what would become two popular island radio staples: "Old Fashioned Touch" and "Victim". The music videos for these two songs would become two of the most requested videos on local music TV and would later find a home on the Overdrive Live DVD Volume 1. The Beginnings CD went on to become one of the top selling CDs of 2002.

Their third CD, All for You, was released in 2003 and contains local radio favorites "You're all I Need," "When Eye Meets Eye" and "Ever Since." Their artistic development over the years has been impressive prompting local music critic Wayne Harada (Honolulu Advertiser) to write of the All for You CD "picking Opihi never has been so satisfying."

The soaring popularity of the Opihi Pickers has kept them much in demand for live performances allowing them to thrill excited audiences at some of the biggest concerts throughout the state of Hawaii. In recent years they have been requested to perform at the KCCN Birthday Bash, KWXX Hilo Ho'olaulea, Bomb Bucha, Bomb Diggity, Jammin' Hawaiians and Bomb Bastic as well as popular carnivals, Ho'olauleas and community events.

After more than a decade of playing music together, the Opihi Pickers have announced plans to take a "long and significant break" starting in June.

"They all still get along great, so it isn't anything like that," said band spokesman Brett Ortone in response to questions via e-mail. "These guys are all very close."

There are absolutely no hard feelings, according to Ortone, and lead singer Imua Garza is adamant about the time off being just a break that will allow everyone to "explore other musical avenues for a while." Rumor has it that Garza and his wife, Tiffa Cruz Garza, have signed with a new label that's based on the mainland.

Garza will also remain involved with his bandmates as a producer. Bass player Kahale Morales migrated to the group Rebel Souljahz, who enlisted Garza to help with their debut, "Nothing to Hide," released last month. Garza is also set to produce the next project from solo artist Kaipo, which will feature Morales and Hoku Garza as studio musicians. Fourth Opihi Picker Kevin Okimoto plans a solo project.