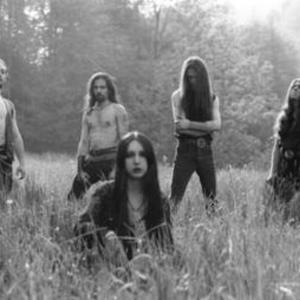 Opera IX is an Italian Black Metal band with Doom, Folk and Gothic influences. The band was founded by Ossian in 1988 with Vlad on Bass and Flegias on Drums. In 1990 the band recorded a demo called "Gothik" which is unlike their other recordings lean towards thrash metal genre. The legendary Cadaveria joins Opera IX as their full-time vocalist.Their next demo called simply "Demo'92" already contain dark, well-composed occult black-death metal with unique vocal delivery, though the production was still mediocre.

Then Silent Bard, a classically trained Keyboardist, joined them at the end of 1993. This was a new step for Opera IX, the new line up recorded their first EP "The Triumph of the Death" with even more extreme and refined material then ever - raw, morbid, sophisticated doom-death including their most popular song - Born in the Grave (over 240 000 views on YouTube!).Currently all the demos are available in the compillation called "The Early Chapters". The first full-lenth "The Call of the Wood " was recorded in 1995 before Silent Bard was replaced by Triskent who was later replaced by Lunaris before the recording of "Sacro Culto" in 1998. In the meantime, Opera IX also featured on the A Call of Irons tribute album to Iron Maiden with a rendition of their longest opus "The Rime of the Ancient Mariner".

The year 2000, saw the release of the third album, which by many regarded as their best - "The Black Opera: Symphoniae Mysteriorum in Laudem Tenebrarum", featuring a cover version of Bauhaus' "Bela Lugosi's dead" as well as the re-release of their debut album with two bonus tracks. They have sold over 18000 copies of "The black Opera".

However, Cadaveria and Flegias decided to leave the band and continue under the name of Cadaveria. They were subsequently replaced by Taranis on drums, and Madras on vocals. This line up recorded "Maleventum" which is oriented to less sinister pagan atmosphere and drew new audiences. Taranis and Madras left the band and then replaced by M the bard and Dalamar respectively the new Opera IX line-up recorded the album "Anphisbena" in 2004 where they completely changed their style to staighforward viking black metal which can be compared to Bathory's Nordland. Nowadays the band is writing their sixth studio album which is according to the latest interview which was taken in 2009 will be the darkest, the most diverse and the most extreme material they've ever released.

It is also worth noting that Opera IX not only is a musical concept but a marriage of Art and Religion where a strong and straight lifestyle prevails on the daily life of modern man.

Opera IX walks along the occult roads of the old Pagan knowledge throughout meditation and rites. They explore the dark meanders surrounding men, travelling through old legends, forgotten traditions and superstition. The real essence of Opera IX is hidden in their lyrics and the music they compose.
About their beliefs, Opera IX honour the Celtic Gods and the powers of Nature, but, above all, they strongly believe in the power of their minds and spirits, in the energy inside everyone.
Official myspace: http://www.myspace.com/officialoperaix
Biella, Italy

The Call of The Wood

The Triumph Of The Death (EP)