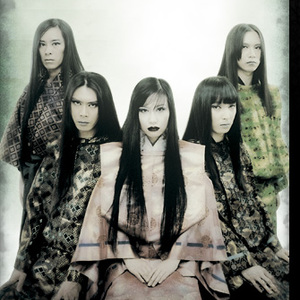 Onmyo-Za (also Onmyouza or Onmyoza; Japanese: ???, literally "Onmyou gathering") are a Japanese heavy metal band who released their first commercial album in 1999. They play quite orthodox heavy metal music comparable to Iron Maiden or Judas Priest, mixed with elements from Japanese folk and pop music. Since their debut, they have appeared in traditional clothing characteristic of Japan's Heian period.

Their name refers to the gathering of yin and yang, and the theme of opposites and cosmic dual forces are prevalent in their lyrics. This contrast is also represented by the female and male vocals.

Each of the band member's stage names feature a double entendre with a sense of humor and make references to cats.[2]

* Matatabi (??) means "flash fire", but it can also be read as a silver vine (loved by cats, similar to catnip).
* Kuroneko (??) literally means "black cat", just symbolizing her personality.
* Karukan (??) is not clear in its literal meaning, though Karu(?) independently means "attacking" or "hunting" and Kan(?) is "adultery" or so. (The words ? and ?, with the latter now meaning "wickedness" or "evil", are the same in old times but have been deviated.) But its reading is familiar to Japanese people as a brand name of cat food.
* Maneki (??) practically means "summoning oni", but its reading reminds most Japanese people of maneki neko.
* Tora (?-??) has little literal meaning, but its reading is the same as tiger in Japanese. This suggests also that he is a fan of Hanshin Tigers.

Their songs mainly deal with Japanese folklore, such as the oni, y?kai, and the Japanese dragon. However, some songs have more concrete themes and inspirations. For example, Onmyo-za have composed twelve songs related to "Ninpocho," or "tales of ninja magic." These songs are a tribute to Japanese author Futaro Yamada and his Ninpocho series. The band's hit song, "Koga Ninpocho," was written for the Studio Gonzo TV animation series "Basilisk," which was based on Futaro Yamada's novel, "The Kouga Ninja Scrolls".

There are also some other songs inspired by Osamu Tezuka and Natsuhiko Kyogoku, and the "Kumikyoku 'Yoshitsune'" trilogy is based on the legend of Japanese ancient tragic hero Minamoto no Yoshitsune. "Soukoku/Doukoku" was written for the Nintendo DS game soft "The Inugami Clan" which was based on Seishi Yokomizo's novel "The Inugami Clan".