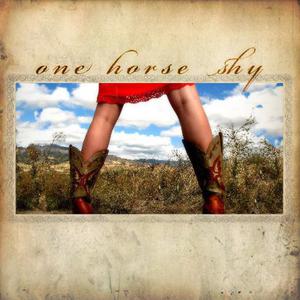 One Horse Shy is a gathering of songwriters and seasoned musicians delivering a fresh brew of Americana. Featuring the powerful songwriting and performances of Mandy Bryn and Cris Kelly, One Horse Shy also takes advantage of the writing and singing talents of bass player Mysha Caruso. With the addition of Bryan Helfrich on drums, the Americana style quintet formed in 2007 has taken the Ashland, Oregon music scene by storm while developing a following from Northern California to Portland and beyond.

The recent addition of dobro, lap steel player and vocalist Bob Evoniuk has set them rolling in new directions as they strengthen their repertoire and wrap up their debut album.

With influences ranging from Johnny Cash to Gillian Welch and Bill Monroe to James McMurtry, One Horse Shy's sound is the culmination of 100 years of roots music distilled into a powerful blend of evocative ballads and foot-stomping roots rock. Writing expressive original songs from their satirical ?California? to the thumping beat of ?Honey in My Tea?, One Horse Shy enchants their listeners with unforgettable harmonies, artful song crafting, and vivid lyrical imagery.

?One Horse Shy brings American roots music a step farther down its ever-evolving trail. Featuring "glistening female vocals" the band shines like a train light in the Cascade rain.?
The Source