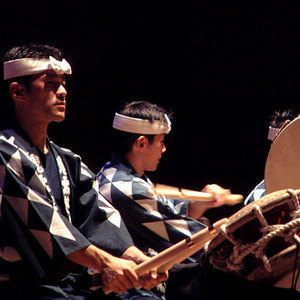 Ondekoza (????, Ondekoza) ("demon drum group"), sometimes referred to as "Za Ondekoza", is a Japanese troupe specializing in taiko drumming. Founded in 1969 by Den Tagayasu, Ondekoza was influential in the rise of the kumi-daiko (group taiko) style of taiko. Not a taiko player himself, Tagayasu helped transform taiko from a festival-based music form to a virtuosic performance art performed on stage. Ondekoza's performances in North America in 1975 was the first exposure for many Americans and helped spread interest in taiko through North America.

Part of a larger movement to rediscover Japanese folk art, Tagayasu brought together a group of young men and women to Sado Island to study and live. Largely without formal musical training, the original members lived communally in an old school house while studying taiko, shamisen, koto, minyo (folk music), and traditional dance. The lifestyle was austere and rigorous with most days beginning with a run before breakfast and filled with study and practice. One of the keys to the groups success was the arrangement of traditional melodies and styles into stylized, artistic musical pieces. Examples of these are their songs yataibayashi, based on the Chichibu festival and hachijo and miyake based on the drum patterns from Hachijo Island and Miyake Island. Also groundbreaking was the Odaiko (Large Drum) solo, a musical piece focused largely on one performer with only minimal background drumming and percussion.