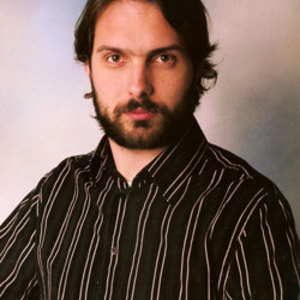 Olivier Deriviere is a French game and movie composer best known for his work on the Obscure and Alone in the Dark series. He was fascinated by video games during his youth and later became part of the demoscene as a tracker musician. He subsequently studied composition and orchestration at the National Conservatoire in Nice Conservatoire under Jean Louis Luzignant. In 1999, he produced the experimental solo album Harry's Day, telling the story of a man dying due to a broken heart, and started to write arrangements of film scores for a percussion quartet.

He subsequently won a scholarship to study jazz and film scoring at the Berklee College of Music. He spent a whole season with the Boston Symphony Orchestra and even had the honour of interacting with John Williams.

Back in France, Deriviere started to work on film productions. He worked under composers such as Bruno Coulais and Laurent Petitgirard creating additional music for artistically challenging productions. On the side, he scored short films, television shows, and documentaries. He single-handedly created the epic orchestral score for Sans Camion and all the songs for the musical film La Tartine. Other film credits including Tempora, La Solitude, Cub, and The Passenger. He received most attention for his score for the short movie The Toast whose sad love story and supporting score was commemorated at many eminent film festivals.

In 2004, Deriviere received the opportunity to score Hydravision's survival horror game Obscure due to connections he established from his demoscene days. He spent a year working on everything related to the sound for the game. He adopted a haunting choir-based sound Aware he couldn't afford to integrate full orchestra, he mixed samples from the realistic Vienna Symphony Library with haunting recordings from the Children Choir of the National Opera of Paris. Following these scores, he produced some humorous funk-orchestral fusions for Championsheep Rally and scored the flight simulator Rebel Raiders: Operation Nighthawk.

For 2007's sequel Obscure II, Deriviere enjoyed the exuberance of recording with the Boston Quartet and produced a more textural score. He worked on further low profile productions while scoring the project. Whether the exciting orchestral overture for Destination: Treasure Island or the whimsical melodious tunes for My Little Flufties, he puts much effort into all his productions. Though chiefly a game composer these days, he is also often commissioned to produce classical compositions. This helps him to always remain challenged as a composer.

Deriviere's latest major work is 2008's Alone in the Dark. He made an effort to demonstrate the real dimensions music can add to games on this production, feeling that many composers in the industry produce mere background music. He created a four hour orchestral score that immersed listeners into the experience and carefully complemented both action and atmospheric scenes. Despite the critical failure of the game, Milan Records published a selection of instrumental music from the score and several pieces recorded with The Mystery of Bulgarian Voices. Deriviere intends to write for more video games in the future, but is currently writing a mass and an opera.

His soundtracks for both Obscure games are available for free download on his homepage at http://www.olivierderiviere.com/. UPDATE: As of September 2009 Olivier has changed his website and you can only stream the music. However, the soundtrack for the PSP game Obscure: The Aftermath can be downloaded from the official game website at www.obscuretheaftermathpsp.com.

Music From Alone In The Dark