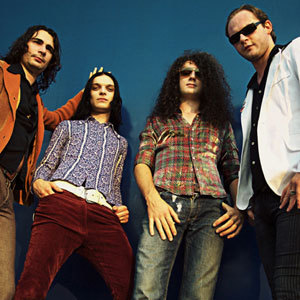 From Treviso, Italy, north east side of country, the band OJM, in spite of their rather recent formation (May 1997), has been able at once to call attention of musical operators and specialized press, because of their particular sound, which join hard rock and psychedelic sonorities, thanks to the influences taken from bands such as Blue Cheer, Black Sabbath, MC5, Grand Funk. OJM's first record "Extended Playing" of February 2001, distributed by Agitato Records/Venus...

OJM's first record "Extended Playing" of February 2001, distributed by Agitato Records/Venus, has reached the number of more than 1000 copies sold; on March 2002 the record company Beard Of Stars/Self has published their first album Heavy, produced by Paul Chain. "Heavy" was sold out a few months from its issue, also promoted by the programming of the album's song "The Sleeper" video clip (on specialized channels as RockTv, ReteA, MTV...).

On October 2002 Massimo (drums) and Matteo (bass) have carried on their cooperation with Paul Chain, playing in two songs of his album "Container" (issued by Beyond Prod.) and touring with him through Italy. OJM's adventure over the Italian borders begins after the issue of "Heavy", distributed worldwide by Beard Of Stars (Cargo, Centurymedia, Abraxas, High Been Music, Self) and noticed by foreign press, who has dedicated to OJM's work more than 100 reviews on music magazines and webzines, like Kerrag!, Stonerrock.com, Stonedgods, Planetfuzz, Hellridemusic.com, Greek and French Metal Hammer and so on.

Meanwhile OJM's style and attitude has turned into a more rock'n'roll sound; they have published on May 2003 a 7" split with the English band Gorilla, always for Beard Of Stars Records. During the last two years OJM have performed in more than 200 live shows, performances characterized by their wild force and powerful expression, dividing the stage with bands as MC5, Motorpsycho, HARDCORE SUPERSTAR, Nebula, Fleshtones, Gorilla, Brant Bjork, and much more. Now they are preparing their third discographic work, reason for, except some summer live shows, they will be closed at the Inside Out, their own analogical recording studio, making up and tracing out a new, involving album.

Definitely not one of those bands that can sit still... Their kickass shows have caught the attention of MC5's legendary bassplayer Mike Davis. The band will be hitting the studio together with Davis from March 20th through the 29th to record their new full-length album. Speaking of great recordings...stay tuned for another jewel signed OJM as the band have recently recorded a session with Brant Bjork! And if this wasn't enough, have a look at their awesome new video "Talking About Revolutions" and get ready to catch them in action on their upcoming italy tour, check the tour section for details Is it only rock'n'roll???