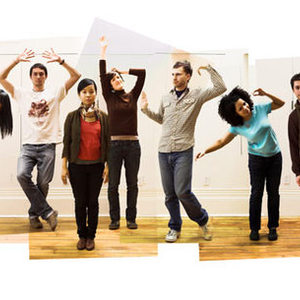 Ohbijou began as the solo project of Brantford singer-songwriter Casey Mecija (born 1981). (She also works as a production assistant at MuchMusic.) Through the process of songwriting and composition, Casey discovered a need for the musical support of her sister Jennifer Mecija (born 1985), whom Casey invited to assist with her early performances. The Mecija sisters later moved to Toronto to attend Ryerson University and the Ontario College of Art and Design...

The music of Ohbijou, which draws on pop, folk and bluegrass influences, has been classified in the indie pop genre. Casey has cited the music of Canadian songwriter Julie Doiron as an inspiration. The music has been described as being similar to Bic Runga and Mazzy Star, and called "hushed, heart-tugging music".

Since the release of their debut album Swift Feet for Troubling Times in 2006, Ohbijou have played festivals across Canada, including the Osheaga Festival in Montreal and the Hillside Festival in Guelph. They played the opening set for the Virgin Festival in Toronto, and were nominated for the 2007 Galaxie Rising Stars Award of the CBC, competing with artists such as IllScarlett, Final Fantasy and Emily Haines of Metric. The band were among the organizers of a 2007 compilation CD, Friends in Bellwoods - based out of Mecija's own Bellwoods Ave. Toronto home and practice space for Ohbijou and their friends - as a benefit for Toronto's Daily Bread Food Bank. In 2008 they were chosen as one of three bands for the Banff Centre's first Indie Band Residency, where they had the opportunity to spend two weeks working with some top producers and recording engineers.

Their music has been playlisted on CBC Radio 3. Their song "St. Francis" peaked at #4 on the network's weekly charts in December of 2006, and ranked as the #34 song on the network's year-end singles chart. More recently, Ohbijou was included in the April 5, 2008 broadcast of CBC Radio's The Vinyl Cafe and chosen as Aux.tv's X3 Artist of the month for August 2009, in partnership with CBC Radio 3 and Exclaim!. As well, Casey Mecija was named one of Chatelaine's 80 Women to Watch for 2008.

Ohbijou is nationally distributed through Outside Music. The band released their sophomore album entitled Beacons in the spring of 2009.