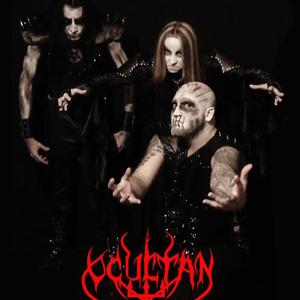 The band started in 1994 in S?o Paulo - Brasil , when Count Imperium - at this time the vocalist and the bass player - got together with the guitarist Cerberus. After 2 years of searching, in 1996, they found a drummer: Lord Fausto . In June of 1996 was released the first musical register of the band ?Eternus Malus?. Six months later the band releases its first Demo-Tape ?Regnus Ad Exus?.

Some months later, in 1997, Dom Junior enters to assume the bassist place. January 1998, Lady of blood enters the band as the guitarist.

After some waiting, in September 1999, finally was released the debut CD ?Bellicus Profanus? via Evil Horde Records.
Six months later, march of 2000, by many reasons, among them, personal and musical, Lord Fausto was removed from the band. Count Imperium assumed as new drummer and Males Maleficarum joined as the vocalist.

February 2002 is released the newest work of Ocultan: ?Lembran?as do Mal, A Crucifica??o? once again through Evil Horde Records. This release showed a new Ocultan, faster and brutal and all the lyrics were sang in Portuguese.
The same year, in December, the band signs with Mutilation Records and releases its 3rd Long Play ?Lords of Evil...? which was released in two formats: CD and Vinyl. This work brought ever more devastation than the previous one.
From this one, the band started to receive many excelent critics from the specialized media!

July 2003 marks the release of the band's first live album: ?Infernal Live? released via Imperial Records
The feedback of the Live CD was better than the expectation and soon the band was receiving even better critics. After this exclusive release, the band already have many songs composed to release its forthcoming album which was released in December under the title of ?The Coffin? via Mutilation Records.

Some time after the release of ?The Coffin? the band started to receive many good critics and the album was acclaimed as the best Ocultan's album so far.
April, through professional problems, Males Maleficarum was invited to leave the band. Daimoth was invited to be the new singer and guitarist.
Continuing with the production of great albums, the band enters in studio to record the 5th album of the career "Profanation".

After the foundation of Count Imperium's own label, Pazuzu Records, is released the new album ?Profanation? which had its first 1000 copies sold less than a month!
The good selling and the good repercussion in the specialized media celebrates all the evolution of the band and their work. It also give them the opportunity to play some great gigs and play in some of the biggest Festivals in Brazil.
November, Daimoth decides to leave the band and Legacy (ex-Morthor) joined as a singer only, since then the band returned to have only one guitarist.

In the beginning of 2006, Ocultan starts the process of composition of the new album. After 13 new songs, the band entered in studio to start the recording of ?Regnum Infernalis?.
This album demands much more attention to the details and took much more time in the process of composition than the others. This album also has some Death Metal influences and a much more technical instrumental.

?Regnum Infernalis? was released in May via Pazuzu Records. Like the other releases, this one had the same good repercussion and is pointed by some people as the best release of the band.
Dom Junior leaves the band in December and Magnus Hellcaller was invited to replace him as the Bass player, current member from Brazilian Black Metal band Blackthorny.

The year of 2008 marks a historical moment for all the Brazilian Metal scene. The recording of the first Brazilian Black Metal band DVD!

The year just started and the band already start to compose the new material to be released in the firsts months of 2010. In between the band is making tour to divulgate the release of the DVD ?Ceremony of Hate?. Ocultan started the year focused in new songs and the band made a deal with the label Freemind Records to release the upcoming album, in december, after finished the compositions and started the studio recordings, once again Ocultan faced changings in the line-up, in this time Legacy left the band for personal problems, with a new stuff about to be finished, Count Imperium decided to came back to the vocals, as it would take some time to find a new vocalist who was prepared to get the songs quickly.