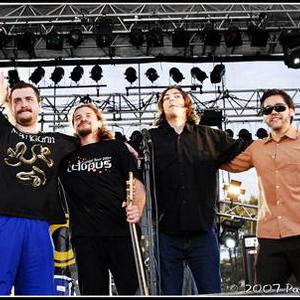 There are multiple artists with this name: 1) A Chilean progressive metal group. 2) An environmental ambient/experimental project by Charles Uzzell-Edwards, released three self-titled albums for Fax +49-69/450464 between 1995-1998. 3) A melodic English psychedelic band (previously named The Cortinas) with one album released in 1970. 4) A German band with four albums released from 1977-81. 5) A Norwegian band with two albums released in the early 80's. 6) A Britpop band from Shotts, Lanarkshire, Scotland formed in 1995. They had three hit singles before splitting up in 1997

7) A Dutch pop group.
8) A jazzy psychedelic American band with one album released in 1969.
9) A Belgian pop group from the seventies, with Paul Michiels.
10) An post-grunge band from Baltimore, MD in the late 90's.
11) A no wave group from New Zealand

1)
Chilean instrumental act Octopus got started in the year 2001, formed by drummer Crist?bal Orozco and bassist Braulio Asp?. Guitarists Sebasti?n Lav?n and Fernando Daza joined in, and then the foursome was ready to fulfill their broadening vision of rock. All four musicians had academic training at the Projazz School of Music. A CD demo comprising 4 tracks was released in the following year: it was recorded in one day on a stage environment (without an audience). After Lav?n left, he was replaced by Jorge Benavides. At the time, the band's repertoire had been augmented, and with the new ideas brought in by the new guitarist, the band eventually went to the studio to record their official debut CD, titled after the band itself - it was 2004.

In the last two years, Octopus gained a cult following in their country's underground rock audiences, mesmerized by their exciting and complex prog metal offering. Concerts gradually became more frequent. In late 2005 the band was signed to Mylodon Records with an eye on their following album ?Bonsai?, which was recorded between Dec '05 and Feb '06, released in mid 2006.

2)
Charles Uzzell-Edward's (aka Cue, a member of Drum Machine Circle and Supergroup, as well as collaborating with Pete Namlook using the aliases A New Consciousness and Create) Octopus project - named after the Octopus Music System, the piece of equipment used to record the albums - generally wanders the Unclassifiable echelon of electronica; at times it is pure ambient techno bliss as is the hallmark of its label, Fax records, at others it is a m?lange of field recordings and samples, accompanied by often frenetic drum patterns; and occasionally its tethers to 'techno music' are only nominal, as blips and bloops of unknown origin emanate from the speakers. Regarded as quite underappreciated, either due to the ostensibly inaccessible nature of the music, or the extreme improbability of obtaining any of the releases - the original runs were limited to 1,000 and were never re-issued.

CUE released three albums under this moniker; it is not known at this time if he will resume composing at a future date, or whether he has retired from music - he has been dormant artistically since 2000. There were rumors circulating about an OCTOPUS 4, but nothing ever came to fruition and there was never any consensus on the matter, nor any response from CUE or Peter Kuhlmann (aka Pete Namlook, the boss of Fax Records).

3)
Octopus was a melodic English psychedelic band (previously named The Cortinas) with one album released in 1970.

5)
Octopus was a Norwegian band with two albums released in the early 80's.

6)
Octopus was a British rock band with one album released in 1996.

7)
Octopus is a Dutch pop group.

8)
Octopus was a jazzy psychedelic American band with one album released in 1969.

9)
Octopus was a Belgian pop group from the seventies, with Paul Michiels.

10)
Octopus was an post-grunge band from Baltimore, MD in the late 90's

11)
Octopus are a no wave group from New Zealand

Into The Void Of Fear

The Boat Of Thoughts (Vinyl)

An Ocean Of Rocks (Vinyl)