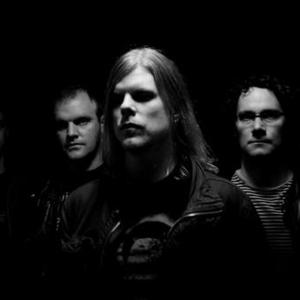 October Tide is a doom metal band which was formed in Sweden in 1995 by Jonas Renkse and Fredrik Norrman (of Katatonia). They released two full-length albums: Rain Without End (recorded in 1995, yet released only in 1997 on Vic Records) and Grey Dawn (1999, originally on Avantgarde, re-issued in 2007 via Peaceville) before disbanding because their "inspiration ran dry" and because Renkse & Norrman decided to fully concentrate on Katatonia instead.

In late 2009 however, despite staunchly refusing the notion of future material for an astounding 11 years, Fred Norrman announced he was leaving Katatonia and had reformed October Tide. Joining him were Tobias Netzell (of In Mourning) on vocals, Robin Bergh on drums and Jonas Kjellgren as a session bassist (for album recordings only). Original co-member Jonas Renkse was no longer participating in October Tide. A brand new full-length album entitled A Thin Shell was released in the autumn of 2010. Meanwhile Emil Alstermark (guitar) and Pierre Stam (of In Mourning, bass) have joined the band on a permanent basis.

Rain Without End line -up:

A Thin Shell line -up:

Tunnel Of No Light