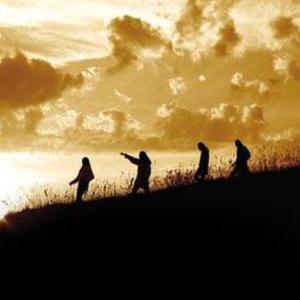 OBTEST has started in late days of 1992, inspired by the then new and challenging Black Metal explosion, particularly in Scandinavia. Bands like Enslaved, Grand Belial's Key, Mayhem, and Darkthrone had a huge inspirational effect on the youngsters. However, the fascination of the music they have been initially involved into Metal and growing up with [Manowar, AC/DC, Death, Grave] has never faded away, and that's perhaps the explanation of the evolution OBTEST music has gone through years.

Still, their aim never was, never is and never will be to imitate anyone or copycat something that was already done before. Thus, through years they have made a remarkable shift from the raw bludgeoning Black Metal band in early demo days, through awe-inspiring Heathen/Black Metal on the debuting T?kstantmetis record, up to Heathen War Metal tagged second album Auka Seniems Dievams that was full of catchy choruses and melodies simply ripping the heart apart. As the newest recordings prove, it was still not the end for their lookout of the optimal combination in Metal, and hell knows if there is gonna be the end as we know it at all.

Recently OBTEST sound has gone even more purified and closer to traditional Heavy Metal than ever before, not forgetting about the fast intense riffing and thundering rhythmics.

Lyrically the band was always very loyal to Heathen, historical, war and mythological themes, in spite of the musical changes. According to them, the concept is the running force for any devoted band ? when you have a clear vision, sooner or later it materializes into something greater, music in this case. Written and sung in native Lithuanian, lyrical part of the band is always translated internationally, as OBTEST consider it very important for others to know what they are signing about. A very important characteristic: the band refuses to use any other musical means to perceive the Heathen ideas, except a standard Metal resources: vocals, guitar, bass and drums.

For 15 years now OBTEST is a fully charged live band too ? that must be enough when speaking about the whirlwind they create during their shows. And far from only locally: OBTEST has taken part in three European tours as well as many local and foreign open air and indoors festivals in entire European continent and USA, performing along with other great collectives of the similar kind, shattering the stages of Germany, France, United Kingdom, Ireland, Portugal, Finland, Netherlands, Slovenia, Slovakia, Czech Republic, Belorussia, Russia, USA, Estonia, Latvia and Lithuania.

Year 2007 has begun on a very high note ? for the first time Lithuanian metal band has visited USA and performed at a famous pagan music festival ?Heathen Crusade? in Minnesota, as well playing a unique gig at an Indian reservation in South Dakota. In April OBTEST have started recordings of their new album in a notorious Hertz studio, Poland, and even if this work on new songs has taken much more time than expected, ?Gyvyb?s Medis? opus was finally unleashed in April 2008, debuting for notorious OSMOSE Productions. Meanwhile in summer 2007 OBTEST, with a massive fan support, have been carrying Lithuanian flag at few important open air festivals at home and abroad: ?Kilkim ?aibu? near Joni?kis, Lithuania and ?Hard Rock Laager? in Estonia in June, as well as prestigious ?Roko Naktys? near Plateliai, Lithuania [5000 visitors] and ?Brutal Assault? in Czechia [10000 visitors from all over the world] in August.
Late 2008 and 2009 showcased the band furthering their live routes to ?Cernunos? pagan music festival in Paris, France, prestigious ?Devilstone? festival in Lithuania, ?Rock For Roots? festival in Eastern part of Germany, ?Perunica? festival in Slovakia as well as single performances in Moscow, Russia and Minsk, Belarus. OBTEST have also contributed on a punk/hardcore compilation album ?We Don't Give A Fuck?, released by Kuravilu Productions in Chile, with a cover of seminal Lithuanian band Sa-Sa. Both Baalberith and Sadlave also appeared on the recent full-length of Russian heathen metallers Arkona, with a guest vocal contribution to a song called Na Moey Zemle.