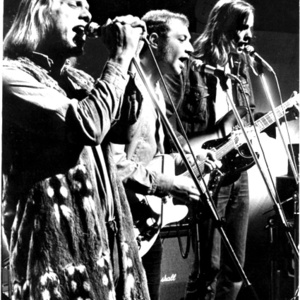 Nynningen was a swedish radical socialist progg band formed 1970 in Gothenburg. The group consisted of Bertil Goldberg, Tomas Forssell and Christer ?-hman (he left after the first album). Their first album, "Man mognar med ?ren" was more mellow and not as politically agitative as their later works. The guitarist Bengt Blomgren and drummer Bernt Andersson played on a couple of songs. On the second album and henceforth they became permanent members of the band together with Torsten ?Totta? N?slund and Nikke Str?m.