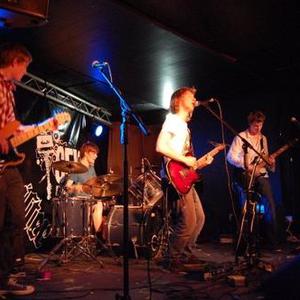 There is more than one artist with this name: 1) Numinous is a four-piece band from Nottingham, England. Their sound is rock with elements of grunge, post-rock and metal. To date they have released one EP - "Relative Chaos and Right Minds" (2009). The group consists of Niall Hill (vocals, guitar), Tom Johnstone (guitar, flute), Ed King (bass) and Phil Howell (drums, cello). They can be found playing various venues in Nottingham.

1) Numinous is a four-piece band from Nottingham, England. Their sound is rock with elements of grunge, post-rock and metal. To date they have released one EP - "Relative Chaos and Right Minds" (2009). The group consists of Niall Hill (vocals, guitar), Tom Johnstone (guitar, flute), Ed King (bass) and Phil Howell (drums, cello). They can be found playing various venues in Nottingham.

Although they amassed a huge local following, the group officially disbanded in 2007 after shifting through several forms and lineup changes. Gareth explained: "Our singer and bass player left the band due to one of them falling for an American chick and the other wanting to pursue Business."

The beginnings of Numinous go back to the core members, Belfast brothers Gareth and Steve. Gareth told Cross Rhythms DJ Greg Sammons on air last year, "We started jamming together as kids, playing the great tunes like 'Wild Thing' and all that kind of stuff. We were both away with a different band TVB Youth For Christ and when we came back to Ireland we set up Numinous." During their tenure Numinous recorded a full length album in 2004, 'Lose The Shadow-Life'. On it Gareth said they were influenced by people like Herbie Hancock, DJ Shadow, Incubus, Oceanside and "The Cinematic Orchestra, kind of real groove oriented stuff. I think in terms of guitar, there are a lot of things about British music that we love and there are a lot of things that we hate. Dave loves his big fat riffs and things like that which is more along the American kind of style but yet I think that the British bands are a lot more creative in their kind of approach to guitar playing and their guitar sounds are a bit more raw rather than polished so we're kind of stuck in the middle - hence we live in Ireland!"

Their second recording was 2006's EP 'Words & Wing Shapes'. On it the band's sound moved from indie to harder rock. Part of this change was through working alongside legendary producer Matt Hyde who has worked with a variety of British and American bands such as Funeral For A Friend, Jack Johnston and Fightstar. Said Gareth, "[On the sessions] we couldn't quite get the guitar sound that we were looking for so that was the great thing about having Matt there because he knew the amps to get and the guitars needed to drive it, etc, etc. When we were working with him it was always the pull of him trying to turn us into a metal band - we enjoy a bit of metal and we enjoy the big guitars but we're not a metal band, we're a good old rock band. There was always a fight when we were trying to reach ridiculous notes on the guitar and play harmonised lead lines and we had to sort of pull him in a bit on that."

'Words & Wing Shapes' also differed from the first album since the band chose a new vocalist, Gareth Dunlop. "I think it was coming to the fact that Andy Briggs, who was our original singer, was more of an indie boy - a singer/songwriter, of his own style - and we were finding it more difficult to match that up with the rock. But obviously, a very important part of our songs is holding that kind of Irish singer/songwriter kind of vibe which is part of our heritage and that kind of thing. So I think that after Andy left, we very much started praying for the right kind of person who would fit the music. Then one day we were out for a wee gander along the Irish Sea and went into a pub and heard a young lad singing and that was the one! His style is a lot warmer and I think it really does sparkle up the songs, you know and give it. . .something!"

2006 was a real highpoint for the band with the release of the EP and them appearing at the Soul Survivor and Greenbelt festivals. Even still, the band weren't able to give up their day jobs. Despite interest being shown from several labels, the big record deal never happened and the group slowly disintegrated.

Steve wrote most of Numinous' lyrics, which were heavily influenced by his and Gareth's Christian faith. Commented Gareth, "I don't write lyrics because I have a brain for rhythms so whenever it comes to big words I don't have a clue what's going on. But Steve reads far too much!" Although, he believes writing spiritual lyrics is not an easy thing to do nowadays. "It's quite hard to communicate spirituality and things like that without it coming across with the clich?s or the typical kind of phrases."

Now the days of Numinous are behind, the guys have expanded their horizons. Next on the agenda for Gareth is a new project he's been working on to help raise funds for poverty stricken people. He told Cross Rhythms, "I have set up a worship collective with the aim of making money to give to the poor, like Amos 5v23-24 and all that. So I have created a record label called Rock Poverty Records and I am working hard at trying to get a bigger label to distribute the album 'The Organic Family Hymnal' which the worship collective Rend Collective Experiment has been working on. You can check out a few tracks at www.myspace.com/rendcollectiveexperiment."

The two talented brothers are now writing and recording together under a new moniker. Gareth said, "We just decided recently to change the name instead of continuing with Numinous." This time Steve will also be doing some singing instead of just writing and playing lead guitar, "as it is always better to sing your own songs than be a puppet. We're calling ourselves Innereye. We think it is much more marketable but still with an edge of, 'Huh? Ha!' We are very much moving into the secular with that band and trying to be salt and light there."

3) Numinous is black metal band from Finland.
From the official site: "Numinous came into being anno 2002 and recorded a demo during the next year which was released by Northern Heritage Records in the same year. This produced nothing fruitful really so we have mainly concentrated on our service in other non-musical fronts instead. To mention other causes for this silence the despicable earthly laws have caused also delay.

Numinous' sole purpose is to serve, worship, glorify and channel the contra-divinity of Jahve, the Divine author of all evil, our unnameable Lord and God.

Any prevalent terms concerning music genres are not only futile but very harmful to the effectivity of our work and thus we do not categorize Numinous and we hereby wish that also others respect this and refrain from any categorization."

4) Numinous was the name used for the first compilation appearances of what is now Numinous Eye, a guitar-drum duo formed by Mason Jones playing psych-drone-noise-rock.