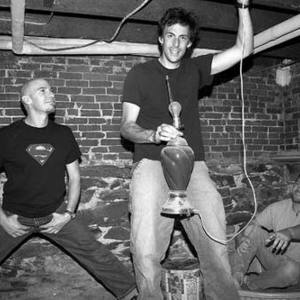 Much like the caterpillar who rarely thinks about becoming a butterfly until he actually is one, NOW IS NOW is a band about living in the moment. "Mitch Alden has passion! That's half the battle with any pursuit in life. This guy's sheer talent as front man for Now is Now will convince you, especially seeing them live. I have their CD and like it enough, but when I saw them perform last month, I was mesmerized!" comments Portland rock critic Aimsel Ponti in considering their live show.

Mitch Alden, former NYC resident turned backwoods Maine hermit, serves as the band's lead vocalist & guitarist, while bassist Drew Wyman and drummer Neil Carroll, provide propulsion to the NOW sound's heart throbbing rhythms. While only together since 2000, their music transcends generations. The band has been described as one which "has learned from their predecessor's mistakes, taken their feet off their monitors, abandoned the rock poses, and ditched the apathy to create a montage of rock stylings that is from Gin Blossoms to Live and Sheryl Crow to STP." - Dave White, Face Magazine

The band's efforts have earned them numerous accolades, paving the way for them to successfully tour New England's club and tavern circuit. "The fact that we don't limit ourselves to where we play helps us gain the positive exposure we need to bring the NOW sound to as many people as possible," says Alden. "We've achieved a kind of zen of the bar band attitude towards these gigs. Given that we roll into places without the pretentious attitude that we only play 'club' shows helps us to break the 'original music ice' with new crowds, rock each place harder than the last, and sell numerous CD's at each performance."

Each year seems better than the last for the band as their second full length effort, "Days of Summer" earns them airplay from regional radio and countless spins in fans' CD players, i-Pods, and podcasts from around the world. If this record is anything like their first CD, "Transitions," which according to Portland rock critic Dan Short who describes this CD as a "shockingly good record," it would appear that the successful future of Now is Now as one of Maine's premier rock & roll bands is one which is already set in stone.