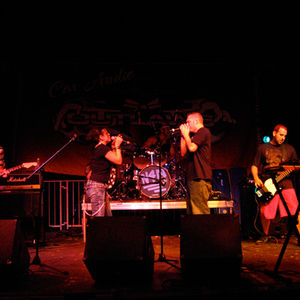 Josh Roberts and Nate Miller have been friends since their days of grammar school. As they grew up life took them on different paths. After high school Nate went on to the military and Josh eventually married Maria who he had met earlier in school. Upon Nate's return from his duty in the Navy he began playing in local rock/punk bands in Modesto, Ca. After catching up with Josh who had already attended the California Recording Institute in San Francisco, they started a small side project with Maria due to the lack of creativity they had felt in the area.

Many nights were filled reminiscing their youth, but some incredible music began to emerge. Josh's sampling and rapping, Maria's extraordinary vocals, and Nate's inventive guitar style mixed with some good old fashioned fun kept the trio coming back. Time for the project was limited due to Maria gaining solo gigs and Nate being a member of another band. Finally, they decided to disperse a raw demo to friends, family and others who would give them non-biased feedback. The reaction was HUGE and it wasn't long before Not 4 Nothin knew this needed to be a full-time endeavor.

Nate had known bass player and friend Andy Sanchez since high school and was his first choice to join the project. Since they had played together before and were influenced by the same musical styles, it was immediately a great fit. Once Andy was on board, they recruited APF a multi-instrumentalist who was approached to play drums. After listening to only a few songs, APF was intrigued enough to join the project. With the addition of these two, N4N knew they had solidified one of the finest rhythm sections they could find. Not 4 Nothin's expectations were right! Once they started playing shows with the new line-up in place, it was obvious they had made the right choices. Not 4 Nothin's sound is truly that; musicians around the globe have raved about the creativity and diversity of the tracks. Testing the boundaries of music is the key mission of these five musicians as a whole. As long as N4N keeps the music flowing they will continue to create a concoction sure to keep the crowd live and craving more! It's truly Not 4 Nothin.