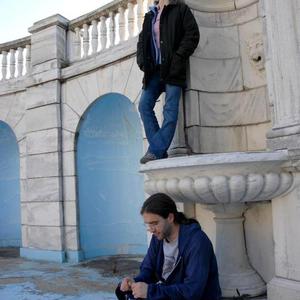 Northern Valentine is a Philadelphia, Pennsylvania based ambient/drone collective anchored by husband and wife, Robert and Amy Brown, and fellow musicians Matthew Primak, Jeffrey Bumiller and Ben Fleury-Steiner. Their music is largely improvisational and is often set to original films that the collective has created. Coaxing sounds from electric and acoustic sources, they weave meditative drones and soundscapes with "barely there" post-rock instrumentation to create a tapestry that Phil McMullen (Terrascope Online) refers to as "minimalist ambiance at its best.

Coaxing sounds from electric and acoustic sources, they weave meditative drones and soundscapes with "barely there" post-rock instrumentation to create a tapestry that Phil McMullen (Terrascope Online) refers to as "minimalist ambiance at its best. Heartfelt, soulful and affecting, like gazing into a scrapbook of memories".

Writing about their 2008 Silber Records release, "The Distance Brings Us Closer", Jeff Penczak (Foxy Digitalis) says..."Northern Valentine's music delivers a sense of floating in space or a communion with nature where the listener is enveloped in clouds of billowing sonics. The listener's imagination can run wild creating images to accompany this ambient soundtrack...In sum, an awesomely hypnotic listening experience."

With the April 2012 release of the follow-up album on Silber Records, "Fin de si?cle", Northern Valentine have created a new series of textures and sounds that have been described as "stylish and haunting" (babysue.com), and as "moving between Elysium and blessed unrest" by Chuck van Zyl (Stars End Radio).

Mark S. Tucker (Folk & Acoustic Music Exchange) describes the album as..."slow, languorous waves of overlapping tones and progressions that narcotize, invoking a deep sense of catharsis, of subtle release of worldly tensions. At times drear and foggy, then suffused and radiant...meditational in the best notion...a map of inner worlds and the vastness of the inky gulf, an ether to drift off into. If you fall asleep while listening, you're going to have some interesting dreams, but you'll also miss subtle happenstances fading in and out of each composition."

Their music has drawn comparisons to a wide range of artists; from Labradford, Windy and Carl, Flying Saucer Attack, Fennesz and Eluvium, to Godspeed You Black Emperor! and Mogwai. They have been performing live and touring in the US and Europe as a collective since 2006, having shared a stage with many incredible artists.

Live performances range from quiet and meditative dronescapes, to loud and fuzzy instrumental post-rock elements, often within the same set. Performances have taken place in clubs, bars, living rooms, basements, churches, restaurants and classrooms, as well as some unusual places like Eastern State Penitentiary and a series of shows in Iceland...including an historic show on June 8th, 2008, in which Northern Valentine played in Reykjav?k, Iceland, with Icelandic band, For a Minor Reflection, at Vi?eyjarkirkja, on the island of Vi?ey. The concert was the first musical performance to be performed at the church since it was consecrated in 1774.

They love playing shows in other countries outside of the US, and have also been known to take musical ?field trips?, with portable equipment bussed out to remote and natural settings; from abandoned buildings and ruins to fields and forests.

The Distance Brings Us CLoser