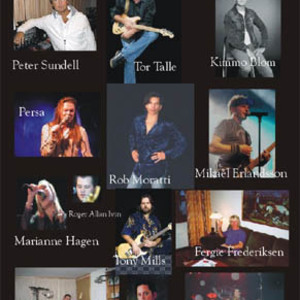 Northern Light is a long planned project from Norwegian guitarist Tor Talle. A popular route to go in recent times is to gather the best vocalists within the scene and have them all contribute to various tracks on an album and that's exactly what Tor has done here. I generally prefer albums to feature one vocalist alone, but in this case Tor has chosen wisely and each vocalist seems to compliment the others. That in some part must also be down to the material on offer, which is consistent, well-written and memorable AOR.

Classic style AOR has been a little hard to come by compared to past years, but Sha-Boom and Novak are two other examples of great current European AOR.
Northern Light is a name to remember if you want your AOR dished up in a pleasant, keyboard friendly 80's style.
The sound comparisons for Northern Light can largely be attributed to the influence of the singers taking part. Tor adjusts his delivery to suit the individual singers, but never loses focus. What he achieves, is a cohesive record that will also appeal to established fans of the bands these singers represent. That gives the album a solid crossover appeal.
Featured vocalists on the album are Fergie Frederiksen (Ex-Toto, Mecca), Kimmo Blom (Urban Tale, Heartplay), Tony Mills (Shy), Peter Sundell (Grand Illusion), Rob Moratti (Final Frontier), Mikael Erlandsson (Last Autumn's Dream) and Persa (After Eight).