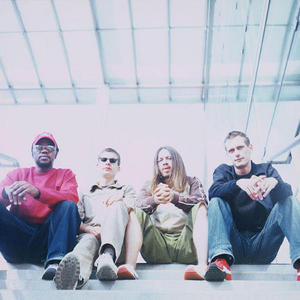 After seven years, three albums, a whole heap of 12-inches and numerous remix projects, this new Noiseshaper release sees the band reviewing their past. That doesn't mean that "Real To Reel" is just another sampler or "best of" compilation: this album looks forward just as much as it does back. It takes us back to the early days of this truly outstanding band, it unearths long lost, ultra rare material and looks to the future with several brand new tracks.

Not even the re-released tracks are taken straight from the archives: everything on "Real To Reel" has passed through the genius hands of dubmaster Adrian Sherwood, has been chased through the nooks and crannies of his magic mixing desk in London. And for dub, that's the musical equivalent of being knighted. It..s also well-earned recognition for the band's many years of hard work
In 2001, the band released the album ..Prelaunch Sequence.. on the renowned Different Drummer label. "Rise" "The Only Redeemer" (feat. Vido) and "Moving Together" (feat. Wayne Martin) are the stand-out tracks on the album and are featured on "Real To Reel".
It was more than two years before Noiseshaper released their second album, "The Signal", which is represented on "Real To Reel" by "All A Dem A Do", "You Take Control", "Jah Dub" and "Dunk". Featuring the G-Corp-MC singer Juggla, a sound system veteran from Birmingham and a perfect vocalist for Noiseshaper, it toned down the house elements in favour of a deep, conscious reggae sound.
The album "Rough Out There", represented here by the TVS remix of "Walls Of Silence", Kid Kenobi's remix of "Bushmaster" and two versions of the title track, was released in 2005 and is arguably Noiseshaper's most mature album. Juggla became a permanent member of the band, giving them a real front man and a highly distinctive vocalist.
Noiseshaper's remixes effortlessly transport this message. The most prominent musicians to get a Noiseshaper remix so far have been Sly & Robbie, which is another giant accolade. The band worked their magic on "Vice Vanity", giving it a decisively different spin. Another remix that displays the band..s sheer class is their version of Ari Up's wired "Me Done", which they chiselled into a stomping blues rock-reggae track. And that brings us back to the title of this CD: where others have to constantly assert their "realness", Axel Hirn and Florian Fleischmann simply are "real". And as Noiseshaper they capture this on tape: From Real To Reel.
Written by Andreas M?ller, a music journalist (Spex, Riddim,?). As Admiral Tuff he presents the ?Dancehall? and ?Dubsolution? shows on rbb Radio Eins.