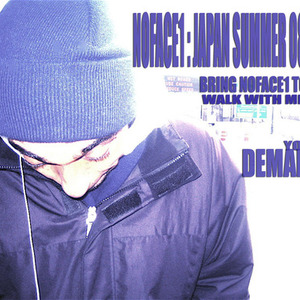 NOFACE1 has started a new movement, a kind of international following in Japan. NOFACE1 is from new york and still lives in Brooklyn. Well known for his musical production. Now, NOFACE1 is ready to reach the world with this new album. The concept of the name NOFACE1 is really very simple. Its meaning is just that, one person without a face. Even in these times of uneasiness, we all are bonded together now by some means or another. This project will make the mind open up, without once letting you forget the New York representation in the vibe and flow on the album.

NOFACE1 represents the unseen, unheard, poor and hard-knock-lifers all over the world. He has moved across all known stages of current and past events in this painting of world affairs from a street bird's-eye view. This album touches the very heart and soul of the meanings of the life that we have been forced by the major powers of the world to live by. In this current state of mind of info-technology, "spy-ism", money or no money, and "us and them," we can't forget the hip-hop. NOFACE1 is getting straight to this point.

NOFACE1 can see it clearly and his word flow is all very understandable even to the new-comers of hip-hop. All kinds of people from rock heads, to the break-beat diggin'-in-the-crate crowd in the UK and everybody in between will find themselves, at some point, bouncing and nodding their heads to this one.

This project will release a well-needed chill-out vibe in those who need it and will make the rebel in you think about the outcome of this new world. Is it the end of the future? NOFACE1 HAS HIS OWN THOUGHTS ON THAT!

NOFACE1 has made some real hip-hop history on this project as well. The artist that blessed the track "SHOUT" is the one-and-only Schott Free, Yes! That Schott Free--the one who did A&R for Loud records, signing such acts as Wu-Tang, Big Pun, and Mobb Deep. Schott Free and Matty Life (inventor of the Unsigned Hype section in THE Source magazine) join together to build one of the greatest hip-hop labels ever. NOFACE1 produced the track and Free rips into this one reflecting the reason why he has over 20 million albums sold under his belt.

Also DAS, the New York Japanese hip-hop artist is on this album as well. He brings a international feel to the mix. DAS is also a member of HIGHTOPNYC and has been locking it down for some time now in New York City. NOFACE1 produced all of the tracks on DAS BLACKSHIP (From New York) which is truly becoming a Japanese hip-hop classic. (See DAS Bio below)


One of the best highlights of this album is the introduction of NOFACE1 daughter Sage. She is making her solo debut with the song Sage The Rock Star. The amazing thing about it is that SAGE is just twelve years old and it really seems she has the wisdom of her name.Her voice and style is really something to check for. With some well rounded notes and unmistakable tone. Sage has done it all with ease and confidence,because of this it is really hard to tell that she is so young.Her voice sounds way past her years.HIGHTOPNYC is planning to release Sage first album sometime in 08'.

NOFACE1 is also very well known in Japan.He has produced two album for DAS ?Brooklyn? (the life and times of a soul revolutionary) and DAS BLACKSIHP (From New York) Sold at DMR, CISCO Japan. (See more info below)

The Land of a Trillion Robots