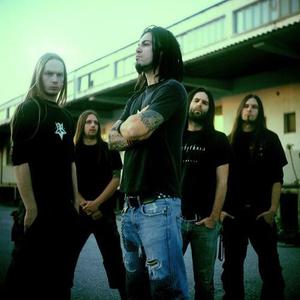 Noctiferia is a industrial metal (now) band from Slovenia formed in 1992 under the name "Emetica". In 1994 they changed it into "Noctiferia" (meaning "eternal night"). Biography: Noctiferia has been a part of pure death metal movement which, over the years, evolved into a very interesting, creative whole that is today present on the national charts and is one of the art best sellers Slovenia can offer.

Biography:
Noctiferia has been a part of pure death metal movement which, over the years, evolved into a very interesting, creative whole that is today present on the national charts and is one of the art best sellers Slovenia can offer.
Noctiferia's debut was recorded and released back in year 97. Today, their album ?Baptism at Savica Fall? represents the beginnings of the southern black metal movement. Noctiferia has the reputation of possessing originality that always leads to something unique, precise and slightly different. Clearly, a band that takes a step forward with their every new release, a band that dares to change and develop constantly. The first responses to Noctiferia's Baptism at Savica Fall of the most prominent world media, creating metal scene, already proved that Noctiferia is destined to become something special.
The band became the focus of interest among metal maniacs and throughout the years 97 and 00, Noctiferia performed over 100 shows at home and abroad. The first time Noctiferia truly shocked the Slovenian public was in 99 when they attended the Novi Rock festival. Since then, the band is familiar with practically all Slovenian stages and festivals. Noctiferia's second album ?Per Aspera? definitely pulled them out of the deep underground. The album was recorded in 02 in the Metro studio with Tat Perusha, as a producer. The first Per Aspera was released for the Slovenian territory only where the album became an unsuspected success. In 3 weeks more than 800 copies were sold in Slovenia, which is an amazing achievement for a death metal band. Noctiferia, already fully adopted to bigger/foreign stages, finally took part in a longer European tour for the first time. While Noctiferia was touring 14 European dates with Kataklysm and Malevolent Creation, a great surprise awaited them at home. Right before they went on a tour, Noctiferia's first video for a song ?Fond of Lies? was finished and it entered the charts on the Slovenian national television (in a show called Videospotnice) winning position #1. Throughout all the 8 weeks available, the video never dropped from first position!
Noctiferia's success spread over the borders since they started cooperation with an American label Arctic Music Group which released ?Per Aspera? worldwide. Per Aspera got its re-release in 03 and the international interest in the group immediately increased. Noctiferia's promo tour started. They visited 18 European cities where they performed as openers for bands like Cannibal Corpse, Marduk, Kataklysm.
Next year, the second re-release of Per Aspera came out (with a bonus video) on the Arctic Music Group for the American territory, and the Master of Metal put out the re-release of a debut Baptism at Savica Fall (with bonus tracks). Noctiferia took part in yet another European tour, this time with Malevolent Creation, Marduk and Immolation. They presented themselves on 24 dates. The tour was a success, with huge fan and media response especially from England, Scotland and Ireland. Noctiferia and Per Aspera were well accepted everywhere. In 04 Noctiferia performed the main stage at the Metalcamp Festival and attended many other open air festivals throughout Europe. They joined the No mercy Festival tour for a few days and performed in Belgium and Holland with Cannibal Corpse, Hypocrisy, Carpathian Forest... After a 10 day tour, the last one to support Per Aspera, Robert, one of Noctiferia's creators left the band. His absence was a big shock and loss to all. Because of the lack of extreme musicians, especially drummers, it is really hard to find a good band line up in Slovenia. The rest of the band respected Robert's decision. It was time to take the next step into future.
The loss of a long-time member and a friend brought new changes. Artistically improved Noctiferia started to discover where nobody else dared to try. If we would say ?Baptism at Savica Fall? marked the beginning of Noctiferia's evolution, and ?Per Aspera? meant the maximum of South European extreme black/death metal scene, then the new material represents fatal flirting with various musical styles dwelling in the mind of this talented quartet from Laibach. Igor Nardin is the artistic mastermind behind the band who designed the new material based on fragments from the past and announcement of a new sound and style, innovated by him.
At the beginning of this millennium, music went through a very chaotic era for music creativity. The scene was suddenly flooded with different combinations of various styles and possible revolutionary steps for the future. The step, that Noctiferia has already made itself. Almost two years ago, Luka, a drum instructor and enthusiastic musician who just loves to be challenged, joined the band as the new drummer. He contributed the much needed rhythmical freshness in Noctiferia.
They started with a pre-production of seven new songs in the Fabrica Studio and continued with recording in the Metro Studio, in Ljubljana. Once the material was recorded, Noctiferia proceeded in Sweden. They finished the album in the Abyss Sudio with Peter Tagtgren, a well known producer (producer of Dimmu Borgir, Children of Bodom, Hypocrisy, Pain, Dark Funeral, Immortal..)

Slovenska Morbida presents Noctiferia in a totally new light, a characteristic that is typical for every new Noctiferia album. With a slight diversion from fast parts unlike the previous album, Slovenska Morbida is filled with electronic bases and decorated with catchy and evil guitar riffs. The album brings out all the dynamics and atmosphere which Noctiferia is famous for.
The new creative era is very noticeable; with the symbiosis of so far incompatible styles, Slovenska Morbida presents a fresh very charismatic image of the new Noctiferia. Today, Noctiferia sounds like a fresh breeze, different, without any unnecessary parts, with loud and clear message - the metal for new generations. The new masterpiece is concrete with very interesting song structure, which does not need a heavy listening before it instinctively penetrates your brain and moves in (sticks there) after the first listening already. Bring out the beast and Fall of Exile caught most of our attention, both songs are powerful/strong radio and club single hits.
In 2010, Noctiferia celebrated the 12th anniversary of presence and artistic creation. Quite a milestone for a band from a 'not priority market' country, though still far from its great potential! The release of Death Culture is the return of the oldest Slovenian extreme metal giant.