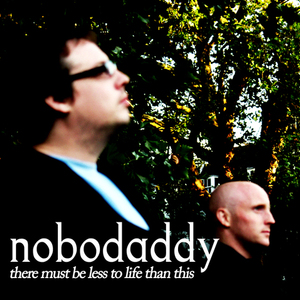 Indie pop/folk band Nobodaddy are childhood friends Mike Wordingham and Adam Clark, whose narrative-led songs at times echo the whimsy of Donovan, the emotional starkness of Christy Moore and the alt-country sensibility of Wilco. After starting life as a duo in 2002, they briefly assembled a band to record the never-released ?Nobodaddy's Children' in 2004, and became fixtures in the London indie and acoustic scenes.

This momentum resulted in the ?Everybody Loves' EP, but their heart lay in the more stripped-down sound of their early demos. The last two years have seen them writing strong songs of love and loss, and performing them in the most direct manner possible, to reveal the heart of the songs and communicate them to their audience.

Their first full-length album 'There must be less to life than this' reflects this sound in its ten stark and intimate songs, which cover emotional terrain from dark melancholy to fierce joy. Adam says "With this album we have captured a true reflection of our music and the friendship that underpins it."

Please note there are two other artists of the same name, one based in Scotland (see http://www.myspace.com/lookitsnobodaddy) and another in America.

There Must Be Less To Life Than This