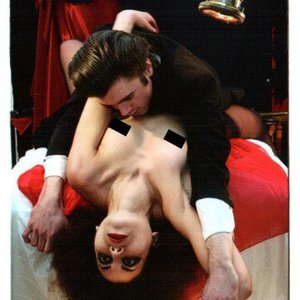 Noblesse Oblige was formed in London, 2004 by French actress/singer/songwriter Valerie Renay and German musician/producer Sebastian Lee Philipp Their debut album Privilege Entails Responsibility is considered one of the classics of the Independent Electro underground scene. After moving to Berlin in 2007, the band released their second album 'In Exile' which won the renowned Russian Steppenwolf Music Prize and an endorsement by the German ministry of Culture. Since their formation, Noblesse Oblige have played over 300 Live show throughout Europe and South America.

After moving to Berlin in 2007, the band released their second album 'In Exile' which won the renowned Russian Steppenwolf Music Prize and an endorsement by the German ministry of Culture.

Since their formation, Noblesse Oblige have played over 300 Live show throughout Europe and South America.

Their new album (CD & digital) "Malady" is released May 28th 2010 and presented with a spectacular and dramatic Live show on a European tour.

'Malady' is an occult concept album that cites the visual mysticism of Kenneth Anger, Aleister Crowley's storytelling, and the morbid melancholy of Christina Rossetti's poetry.

The album's title, partly inspired by Apichatpong Weerasethakul's film Tropical Malady, a modern day ghost story set in the jungle of Thailand, symbolises the mental afflictions and dark temptations of the heart expressed in the album's eerie tales of voodoo gods, soul electrification, and tropical fevers.

Further inspiration was the Voodoo literature by Haitian writer Rene Depestre and readings of field research work by anthropologist E.E. Evans-Pritchard and his studies of witchcraft and magic among African tribes. The aura of these texts and stories have been incorporated in many of the songs while Valerie, who during her teenage years lived on the French Caribbean island of Martinique - one of the heartlands of voodoo practice - worked up her own memories of myths and stories told by the locals, including her voodoo priestess neighbour.

Fittingly, the production of the album also features several exotic ingredients such as timbales, kazoo and ukulele in continuation of the band's use of world music sounds, mixed with their traditional blend of kitsch and new wave theatricality - for as dark its subject matter is, Malady contains some Noblesse Oblige's most melodic and poppy moments yet.

As its predecessor, Malady was recorded at the band's own studio in Berlin. Using voices, acoustic guitar, drum machine, live percussion and only sparse electronics, Malady features N.O.'s most stripped down and acoustic production to date that was based on a series of Live-take recordings and minimal post production.

The album artwork features photography made in collaboration with Bulgarian artist Kiril Bikov, who has relevantly captured Malady's romantic gloom, incorporating all the elements referred to on the album.

Affair Of The Heart