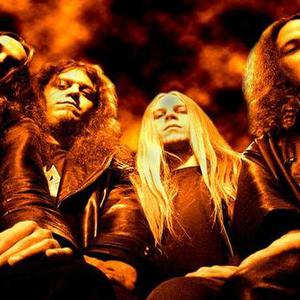 Founded in 1997, German metalheads Ninnghizhidda started with the recording of 'The horned serpent', a 6 track demo which was the basis for the 1998 album 'Blasphemy', released through Invasion records and licensed to Avalon/Marquee for Japan. Provided with great reviews worldwide, 'Blasphemy' spread the band's name as an ambitious and blasting new act, combining the trademarks of fast and furious black metal so far with classical arrangements of a soundtrack.

Due to several line up changes in the rhythm section (e.g. Ventor), extensive touring became impossible, so instead the band invested their time into writing new and even better material for a new full-length. After Invasion records vanished, the band entered the studio to produce an album excerpt, the 3 tracker 'Mistress of the night', showing the band with a new stable line up and elaborated refined sound. The recording made it's way through the metal press, including having the song 'Rape' featured on Rock Hard's Unerh?rt CD 7. Several labels showed serious interest in the band, and after serious consideration, Ninnghizhidda signed with Displeased records. Late 2001 the band entered the studio again to record their new album 'Demigod', an album full of dark majestic tracks that please fans of their earlier work as well as fans of bands like Samael and Dimmu Borgir!