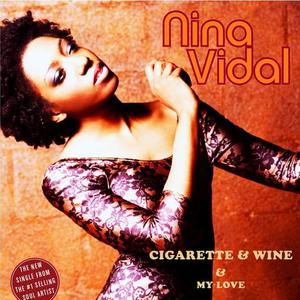 Timeless. The word most often used to describe singer/songwriter Nina Vidal. Embodying the elegance of Jazz and the sincerity of Soul, Nina breathes life into the meaning of a song with her rich, smokey voice. Nina's career seems as destined as her name. Born Nina Simone Vidal she began playing piano as a child. By her teens she was writing poetry and shaping ideas into songs. Originally looking to pursue a career as a songwriter, Nina's path would dramatically change while she was studying music business at New York University in Manhattan.

Nina's career seems as destined as her name. Born Nina Simone Vidal she began playing piano as a child. By her teens she was writing poetry and shaping ideas into songs.

Originally looking to pursue a career as a songwriter, Nina's path would dramatically change while she was studying music business at New York University in Manhattan. It was at NYU that Nina began attending a weekly open-mic night that hosted up and coming singers looking to get their start. It was during one of those open-mic nights where Nina met her future partner, musician/producer Cat?. His band was performing when Nina approached him to see if he would be interested in helping her find a vocalist to record a song she had written. After listening to Nina's demo he agreed to work with her, but on one condition - she would have to sing her own material. Nina, still not sold on the idea, somewhat reluctantly agreed, if only for the reason that she'd be able to properly record her song.

With Nina singing and playing piano and Cat? handling the production, they began working on some songs she had written. The sessions were going well and Nina decided she would post a few of the songs online to share with friends and get some feedback. By chance, executives at a Japanese label, Village Again, came across her site and were impressed with what they heard. They offered to release the album in Japan.

So in September 2008 Nina's self-titled debut album was released in Japan, and with no press and very little fanfare the album created a stir. Within 6 days of its release it was the most downloaded Jazz album on iTunes Japan, and the album, Nina Vidal, would replace Norah Jones's smash hit Come Away with Me as the #1 Contemporary Jazz cd in the country. She would hold on to that #1 spot for an amazing 8 months.. The album went on to reach #3 on the Pop chart.

Like so many great artists before her, Nina would initially experience success outside her home country first. Her music has gained her an international following of fans in the US, France, UK, Germany, Poland, Spain, Japan, Indonesia, China and all over the world.

By the end of 2010 Nina would surpass her previous success in Japan when her sophomore album "The Open-Ended Fantasy" was pre-released due to overwhelming demand in that country. In less than 24 hours it became the #1 Contemporary Jazz Album, placing 5 Top 10 Jazz Singles simultaneously on the iTunes Jazz charts.

A fantastic songwriter in her own right, Nina also possesses the rare ability to make any song she touches her own. The flexibility of her voice breathes life into a lyric with depth and resonance. She is as comfortable with songs by Cole Porter as she is with those by Paul McCartney or Bob Marley.

"The Open-Ended Fantasy" will be released worldwide Spring 2011. A melodic blend of Soul, Jazz, Pop, and Funk, it has already been hailed as a "masterpiece", and Nina as the next great voice of her generation.

Do It Again - single