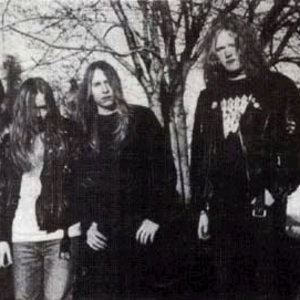 1) a death metal band from Sweden that later became Entombed.

3) an ambient/trance project from Germany

9) A metal hardcore band from Portland, Oregon active during the first several years of the 2000s.


For a band whose technical lifespan was just over two years, fewer bands have left more of an indelible impression upon the extreme music scene then Nihilist. Formed in 1987 the group bore the name Brainwarp before morphing into Nihilist. It was the brainchild of drummer Nicke Andersson, who was joined by two of his friends from summer camp, Alex Hellid on guitars and Leif Cuzner on bass and vocals (Daniel "Dudde" Strachal, who was a part of Brainwarp would later go on to play drums for Lobotomy).

Having first been influenced by the '80s hardcore and crossover bands, Nihilist were soon introduced to the likes of Death and Kreator and the bastard cross-pollination of influences would soon breed its own virulent new hybrid strain. For their earliest rehearsals and shows, they mixed a repertoire of cover songs and originals. Nihilist found two fortuitous additions when they went into the studio in March of 1988 to record their first demo tape. Mutual friend Mattias "Buffla" Bostr?m had rehearsed a few times as a singer with the other three. As they were eager to find a standalone vocalist, but for the recording session the band drafted in session vocalist Lars-G?ran Petrov, who was then the drummer for cult Death Metal band Morbid. Also joining as a session musician was L.G.'s band mate in Morbid Ulf "Uffe" Cederlund on second guitar. It was these five members that the three-song Premature Autopsy was recorded.

The tape received [an] immediate [positive] reaction. Hardly surprising given the immediate jolt of songs like "Supposed To Rot", which kicks off with a riff that a group averaging 15 years of age have no business coming up with. Traces of their soon-to-be infamous buzzsaw sound can [already] be heard within the chorus of "Sentenced To Death" which they would soon develop into their own identity. The band resumed playing shows with their same formative line-up, minus the session musicians, and during one such show L.G. impulsively joined them on stage, and the chemistry simply clicked. Thus Nihilist wasted no time naming him a full-time member. They also found a new bassist, Johnny Hedlund, with "Leffe" Cuzner moving back to the second guitar slot where he originally began. The quintet was now complete and the band were in prime form.

After additional shows and songwriting sessions, in December of 1988 the band went into Sunlight Studios in Stockholm, Sweden to work with a then-unknown producer named Tomas Skogsberg in order to record their second demo "only shreds remain". This three-song tape showed the band's consistent musical development, and gave them the sort of guitar sound and bottom end they had been striving for, and it would mark the beginning of a long-time working relationship between the core members and the producer Skogsberg. The band continued to incorporate new influences into their sound (R.A.V.A.G.E. a.k.a. Atheist and Vomit's "Rot in Hell" demo were particular new faves) such as mid-paced elements or the breakdown in "Face Of Evil". Meanwhile, The band experimented with tempos, easing back on their pure bursts of speed to create some moments of glorious mid-paced brutality.

The demo was hailed within the underground as a masterpiece, and word quickly spread internationally that Sweden had delivered a world-class contender on its hand. Up until that point, the majority of Swedish bands in the metal scene were either melodic heavy metal or followers of the then-vibrant thrash scene. Although a number of death metal bands had existed for the past few years in the underground, few where able to survive past the earliest demo stage, defining them more as hobby bands then as serious commitments, although several countries had put themselves on the death metal map by this time (particularly in the UK, United States and Netherlands), Sweden was not considered a fertile spot for such music - although that would change. First, however, the band needed to survive even further personnel changes.

Directly after the "Only Shreds Remain" recording, the band suffered a serious setback when the band lost one of their guitarists Leif to circumstances beyond their control. His family moved to Canada and he was forced to accompany them, being briefly involved with the band Rapture (later known as Lobotomy). Fortunately their old session friend Uffe Cederlund from the first demo tape was now free, as his old band Morbid had split up (with singer Per ?Geten/Dead? Ohlin soon to be headed to Norway to join Mayhem as their singer before taking his own life shortly afterwards). Uffe was trying to get his own band Infuration started, but when the offer cam in from Nihilist he quickly discarded his own plans and joined the group as their second guitarist.

By now the band was attracting even more attention and with the revamped line-up they started playing more shows then ever throughout Sweden. At this point the band were approached by Jon ?Metalion? Kristiansen of the renowned Slayer Magazine to take part in a compilation EP with three other burgeoning British bands (Carcass, Bolt Thrower and Paradise Lost) that was to be the first-ever release on his head not found label, and the band quickly recorded the new track ?morbid devourment? for this purpose. The release never came together and Metalion subsequently tried to include the track on a compilation EP titled ?Brutal Jaevla D?d? (Brutal Fucking Death) but this also failed to materialize - thus the track was shelved for the time being, but their reputation continued to grow. This was the last recording with Leif.

Its also worth pointing out of difficult it was in those days to raise awareness for a band outside your immediate city limits, Technological advances in the past decade, such as e-mail, internet and downloading, have changed the face of how people discover, discuss and purchase music. In the late '80s, it required a dedicated ring of tape-traders, which required a lot of nowadays-unthinkable things such as writing letters by hand and sending them in the mail (and waiting month or more for a reply if your contact was overseas). In these days you were sending cash in letters in hopes of obtaining a demo tape (which in many cases you had only read about in fanzines but never actually heard before), you were constantly requested to send back someone's well-worn and glue covered stamps, and the worst insult you could bestow upon someone was sending their copies of demos on brightly-coloured cheap cassettes after they'd sent yours on expensive, high-bias tapes. It was an extremely slow, time-consuming process, that left no small amount of room for people to take advantage of others, but it was not only crudely effective, it was fun. And discovering a band like Nihilist for the first time was one of the things that kept the scene alive in such days when you often had to drive for hours just to get to that ?good? record store that carried records from labels like Combat and Earache.

The band went about recording their third demo tape, Drowned, in August of 1989 with this line-up, not knowing it would be their final recording session together the track ?severe burns? showed a solid progression without loosing their roots and beginning to incorporate a welcomed doomy edge amidst the carnage. This song would later be reworked (including all new lyrics) for the second Entombed album Clandestine. In addition to the songs on the demo cassette, two other songs were recorded in a more raw form, both of which would later surface on the Radiation Sickness bootleg 7?, which also featured the band's tribute to the Michigan-based Death/Grind legends [arist]Repulsion by covering ?Radiation Sickness?. Nihilist only managed to put out only one semi-official vinyl release (the rest of their output was only on cassette), which was their own bootlegged version of the Drowned 7? single on Bloody Rude Defect Records, released by the band's good friend Fredrik Holmgren. Their lack of proper vinyl and CD releases is something that the bootleggers have willingly exploited up to this point.

Just after completing the demo, the band had increasing differences with bassist Johnny Hedlund. Rather than simply forcing him out, the band took a non-confrontational approach and simply broke up Nihilist, reforming a few days later (without Johnny, who formed Unleashed) as Entombed.

The music can best be described as ambient trance. Mostly slow beats with voluminous sounds.

Call Down The Thunder