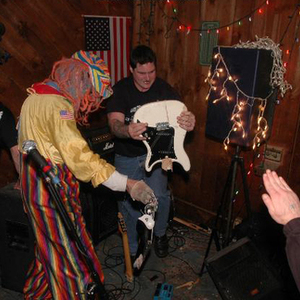 There has been more than one band called Nightstick. -- 1) Nightstick is a Boston trio Alex Smith (bass, vocals, violin), Cotie Cowgill (guitars) and Robert Williams (drums, tapes) Their first album, Blotter (0, 1995), was a tribute of sort to their idols (Pink Floyd, George Clinton, Lydia Lunch), a wildly psychedelic and heavy tribute to an entire alternative civilization, best summarized in Blotter.

Ultimatum (Relapse, 1998) is a far more mature effort. The eleven-minute, many-part title-track is a harrowing melodrama that crawls at a slow, monotonous, Black Sabbath-esque pace, pierced by devastating guitar distortions and by a beasty Albert Ayler-ish saxophone, periodically visited by a slow version of Led Zeppelin's How Many More Times' riff. The trio manages to fuse acid-rock, stoner metal and the most experimental side of Type O Negative. Four More Years is even longer and even noisiera, and probably the masterpiece: it build tensions through an endless sequence of guitar noises and then releases it a bit at a time; and the second half is merely rumbles of warplanes.
August 6, 1945 is seven minutes of pure noise, the a soundtrack to war and a disturbing analysis of fear. United Snakes is three minutes of sheer terror, the singer screaming while guitar and drums simply beat the hell out of his scream. Dream Of The Witches Sabbath even employs a theme from Berlioz's Fantastic Symphony. The ferocious rock and roll of Pig In Shit is the only track that resembles a "normal" song.

Death To Music (Relapse, 1999) is a more straightforward work that focuses on the musical aspects of the previous album, dispensing with tapes and assorted manipulations (Babykiller, Boot Party Theme, Egghead).

http://www.scaruffi.com/vol5/nightsti.html
-
2) A short lived band from Brisbane, Australia featuring ex members of Not From There and Regurgitator.