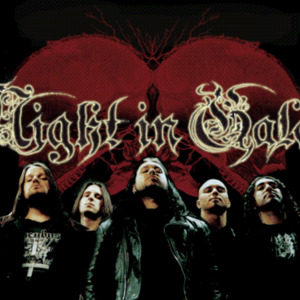 Formed in 1995, the german Death Metal outfit NIGHT IN GALES has steadily grown up to be a force to be reckoned with. After the quite succesful ?SYLPHLIKE? demo, which has been one of the best selling death metal demos ever, and the ?RAZOR? EP they signed to NUCLEAR BLAST RECORDS, kicking off a row of high quality releases. Their 1997 debut album ?TOWARDS THE TWILIGHT? and its follow up ?THUNDERBEAST? in 1998 displayed an intense blend of raw power and catchy melody, strong enough to catapult this heavy five piece onto Germany?s no.

Their 1997 debut album ?TOWARDS THE TWILIGHT? and its follow up ?THUNDERBEAST? in 1998 displayed an intense blend of raw power and catchy melody, strong enough to catapult this heavy five piece onto Germany?s no. 1 in their genre. Also NIGHT IN GALES, consisting of Bjoern Goosses (voice), Jens Basten (guitar), Frank Basten (guitar), Tobias Bruchmann (bass) and Christian Bass (drums), always have stated their reputation as a damn heavy live act - 2 European tours (e.g. with In Flames, Dismember), some mini-tours (e.g. with Hypocrisy, Death, Cradle Of Filth), lots of festivals ( e.g. the famous Wacken Open Air, Summer Breeze Open Air etc) and countless single shows offered the audience a lethal pack of unbound energy each night.

But besides their constant live presence NIGHT IN GALES of course didn?t forget about songwriting. Their 3rd album ?NAILWORK?, mixed by producer legend HARRIS JOHNS and released in March 2000, took new paths and its mixture of crushing Death Metal, some more thrashier parts and the interplay of guttural throatwork and melodic vocals established NIGHT IN GALES anew as Germany?s leading act in extreme metal. Another European tour (with Old Man?s Child, Krisiun etc) followed and NIGHT IN GALES left an enthusiastic crowd show for show.

In late 2000 NIGHT IN GALES and NUCLEAR BLAST RECORDS split up, but realizing NIGHT IN GALES? potential MASSACRE RECORDS picked them up just as quickly. In january 2001 NIGHT IN GALES recorded their latest album ?NECRODYNAMIC?, and it definitely showed that death has no limits! ?NECRODYNAMIC? gave extreme metal the long overdue update and guaranteed multiple eargasms with its upstyledown mixture of crusty Death Metal madness, whippin? Thrash riffs and a whole lotta rockin? easiness, wrapped in HARRIS JOHNS? stereokilling production and a controverse artwork ! ?NECRODYNAMIC? even led NIGHT IN GALES to the land of the rising sun, playing a Japan-minitour with Defleshed and Dew-Scented in spring 2001. Also the crowd at 2001?s Wacken Open Air banged their heads to the sound of the scythe again.

But lightly come, lightly go - MASSACRE RECORDS unfortunately didn?t put enough energy in the promotion of ?NECRODYNAMIC?, and finally they even let NIGHT IN GALES down while playing a European tour with God Dethroned in Autumn 2001. The guys had no chance but to quit the tour, which also made them leave MASSACRE RECORDS as soon as possible. Being disappointed and disillusioned, NIGHT IN GALES unavoidably fell into a deep hole, and all members more or less concentrated on other projects (such as IN BLACKEST VELVET, BLOODRED BACTERIA or THE RULES). But even the meanest backstabbing can?t bring NIGHT IN GALES down to zero, and having played about 200 shows since NIGHT IN GALES was born, the guys were hungry for more.

So NIGHT IN GALES absolved some pretty successful shows in 2002, e.g. at the Summer Breeze or Party San open air. In autumn 2002 drummer Chris left the band, going ahead with metalcore hopefules Deadsoil. But NIGHT IN GALES didn?t have to search for long for a new drummer, and Adriano Ricci (hailing from Coronation / Torture Chamber / Blood Red Angel) joined the plot in early 2003. Finally 2003 saw the first succesful NIGHT IN GALES shows with the new line-up, e.g. at the Dong Open Air or Up From The Ground Open Air. 2004 didn?t see that much shows, while NIGHT IN GALES started the songwriting for #5, nevertheless the guys of course shook some stages pretty heavily. In early 2005 NIGHT IN GALES did a very succesful mini-tour with Fear My Thoughts and Bitterness, that once again proved the crowds still want more necrodynamic sounds.

Now, it?s summer 2005, NIGHT IN GALES celebrate their 10 th anniversary. And not having forgotten where they come from and whom they should pay tribute to, NIGHT IN GALES release the ?TEN YEARS OF TRAGEDY? ep for free! Featuring 4 tracks, ?TEN YEARS OF TRAGEDY? can be downloaded including lyrics and artwork from the band?s official website www.n-i-g.com ! The response has already been overwhelming, and if not only fans & press realize it, but any honest company as well, there?ll for sure be some more wicked NIGHT IN GALES noise soon...!