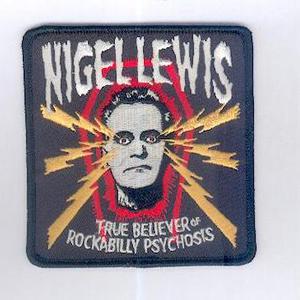 Artist Name: Nigel Lewis Birth Name: Nigel Hayden Lewis Birth Place and Date: Tobago, Dec 5 1966 Official Bio When ?Movin? erupted onto airwaves in 1996 and everybody was caught up in "Moving to the Left," Nigel Lewis became a household name. He has since achieved many successes and accolades including the highest musical honor in Trinidad and Tobago when he was crowned Road March King. The phenomenal tide continued the following year when Nigel's mega hit ?Follow the Leader? planted a seed that is still growing today with over 500...

Birth Name: Nigel Hayden Lewis
Birth Place and Date: Tobago, Dec 5 1966
Official Bio
When ?Movin? erupted onto airwaves in 1996 and everybody was caught up in "Moving to the Left," Nigel Lewis became a household name. He has since achieved many successes and accolades including the highest musical honor in Trinidad and Tobago when he was crowned Road March King. The phenomenal tide continued the following year when Nigel's mega hit ?Follow the Leader? planted a seed that is still growing today with over 500,000 certified copies sold, making it the largest single copyright revenue earner in the history of Calypso music.

However, Nigel's musical journey begins on the island of Tobago, the smaller of the two main islands that make up the Republic of Trinidad and Tobago. It is located in the southern Caribbean Sea. His parents, a dancer and jazz musician respectively, definitely influenced his career path. Since the tender age of seven, Nigel sought refuge from hardships by imposing his self made security blanket called music where he draws from his personal triumphs. By the time Nigel was fourteen he had written and sung a song for the Prime Minister of his country, addressing the poor living conditions in his hometown of Toco. Shortly after Nigel's performance the poverty stricken town of Toco saw improvements.

Nigel Lewis has developed into a remarkable singer/songwriter/musician in many ways. Lewis taught himself to play six instruments without formal classroom training and his clairvoyant lyrics have confronted universal issues, such as poverty, world peace and voting rights. His music is chock full of dance jams while sending shares of praises, unapologetic messages, and inspiration to those it touches.

?My music is about the people, not me. It is how the once dubbed ?party vocalist of the year? describes his calling. Although his trademark is up-tempo party songs, Nigel's main source of inspiration comes from his relationship with God. Nigel loves to interact with people, which is why his songs are known as call and response music that require the audience to take part in the songs and enjoy them. Lewis also mentions ?It is a joy to watch people having fun?. While his dynamic live performances have captivated audiences worldwide, his music gives listeners food for the soul. Nigel has always been willing to be the voice of the people. Today, Nigel is still bustling with energy as a strong performer. He continues to travel across the world with his band ?HD? entertaining people and leaving a symbol of excellence wherever he goes. Nigel's seventh and eighth albums showcase his talent as a singer, songwriter and producer. His growth is evident in the recognition that he continues to receive. Currently Nigel has received ten Marlin Awards nominations for his album ?Unlock the block? which illustrates his dedication to speaking for the unheard and is made evident through the lyrics of ?Unlock the Block? the theme song for the Felon Disenfranchisement campaign.

The response to the nominations has heightened expectations for the forthcoming album, ?Light Up the Darkness? which detonates his lyrical gifts with force and precision, and is sure to continue his wave of legacy in the world of music while he enthralls audiences of all age.


Nigel Lewis: I was born in Tobago, started singing at 5 in school, came to Trinidad at the age of 10, sang at my first competition at 11 and won with my first song? Army Band? and I won every year after that.

Nigel Lewis: Well, music was always in me at a very early age but when I was 15, I started playing instruments. The guitar was my first, then drums, bass, keys, pan etc? I started singing in the big bands in Trinidad in1986. I then became a house hold name in 1996 with my first hit song? Movin? and then the year after, I did ?Follow the Leader? and the urge hit and that was huge for me and I followed that with a track called ?Take That and Cool It?, then I left and decided to become a Christian and sing for the Lord and now I have my own recording studio and I produce my own music and some for other Nigel Lewiss too.


GR: If you could share the stage with any Christian or secular artist in the world (living or dead) who would it be?

Nigel Lewis: I would love to share the stage with Kirk Franklyn, Tye Tribette and Wyclef Jean.

Nigel Lewis: Hmmm, my favorite song, it will have to be ?Follow the Leader? just because of the smile it puts on people's faces.

Nigel Lewis: Matthew 6:33, ?But seek ye first the Kingdom and all His righteousness and all these things will be added unto you?, need I say more?

Nigel Lewis: Just looking at the young people and listening to them talk, dance, etc?.

GR: What career goal did you abandon for music?

Nigel Lewis: Working for the Ministry of Health in Trinidad.


GR: Name one thing that fans do not know about you.

Nigel Lewis: They don't know I play several instruments and that I am a producer.

GR: Name something personal that gives you great satisfaction.

Nigel Lewis: When people tell me they love my music and the joy it brings to their life.

GR: What has been your lowest moment so far in life?

Nigel Lewis: Homeless and living in my car.

Nigel Lewis: Winning 17 awards and being nominated at the Marlin Awards.

GR: What is your philosophy of stage ministry? Is there any one message that you always want to leave with your audience?

Nigel Lewis: Yes, it's nice to be important, but it's more important to be nice.

GR: Can you name three things that you wish you knew when you first got started doing music?

Nigel Lewis: The music business, how to sing (LOL) and stage presence .

GR: What are the three things you enjoy most about touring? And the least?

Nigel Lewis: Going to different countries and meeting new people, and the least, staying at a yucky hotels and bad promoters.

GR: What is the best audience that you have ever played in front of?

GR: What country would you tour (even if you didn't get paid to perform)?

Nigel Lewis: I pray and ask God to use me to feed His people. I also am thinking about putting a smile on the peoples faces.

Nigel Lewis: On the road.

Nigel Lewis: My goal is to light up the darkness. I do music because it's the gift that was given to me from the Father. I use it to spread His message.

Nigel Lewis: yes, my new album is due out in April. It is called ?Light up the Darkness?.

Nigel Lewis: Jesus is my everything. I would not be here if it was not for Him. All the wrong I have done He forgave me and He is always there for me.

Ministry
Image is Nothing! Faith is Everything-Light up the Darkness

The Chronicles of Nigel Lewis