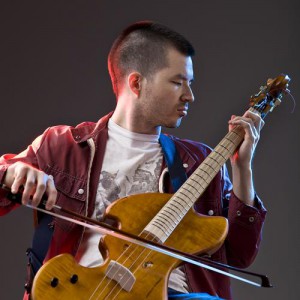 Classically trained from a young age, Nick branched away from classical music as he became interested in the blues in his late teens. He began writing music for cello, gradually incorporating singing and lyrics while he played. "When a friend taught me Shady Grove , things really started to come together." He began writing songs, drawing heavily from early blues structures and incorporating a straightforward lyrical delivery to his songwriting. He took a year off from college to live in Japan with his father, playing cello exclusively, to the point of developing severe tendonitis.

After becoming frustrated with the available electric cellos he developed and made his own instrument. The design is entirely unique and allows him to stand while playing, leading many who view him for the first time to believe he's some how managed to bow a guitar. With the creation of his new cello, the doors to a more modern electronic beat driven sound were opened. With "Crime Pays for Nick Iguana" his production and songwriting skills have matured, yet he still holds true to his musical roots. The new EP morphs through an eclectic mix of genres, rarely repeating a single trope, yet maintains a pop driven melodic force.

?Nick Ogawa is a genuine talent...While the songwriter can clearly hold his own solo, like a modern day Robert Johnson, his heart lies in complex, orchestral arrangements .... The impressive performances and fidelity suggest the new project will be nothing short of astounding? Ben Krieger, JezebelMusic.com

"Ogawa's smooth, smoky singing voice is deliberate and haunting on traditional tunes like ?Shady Grove.? Highlight that with the occasional heady classical breakdown from the cello and you have something like Japan via the Wild West, and in this case, Brooklyn, too." - DowntownExpress.com