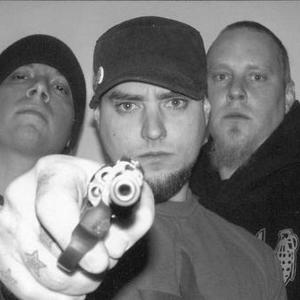 NEW SOCIETY OF ANARCHISTS came together in Milwaukee in 1990 when Zakk and Arlo (brothers) asked Jason (cousin) to start a band. They found a drummer and started setting up shows throughout Milwaukee. In 93-94 they put out their first self titled cd only to have it fall on deaf ears. Disappointed but not discouraged, NEW SOCIETY OF ANARCHISTS pushed on, continuing to hone their misunderstood style of hard core, thrash and punk.

Disappointed but not discouraged, NEW SOCIETY OF ANARCHISTS pushed on, continuing to hone their misunderstood style of hard core, thrash and punk. In '96 they put out "SLAM! STOMP! MOSH! CRUSH!", which landed them a slot on the '96 VANS WARPED TOUR giving the band their first taste of the road and breaking them into the national circuit.

After the WARPED TOUR, NEW SOCIETY OF ANARCHISTS went back into the studio to record "RIOT GUN", the band's third release.

NEW SOCIETY OF ANARCHISTS toured in 2001 independently and was chosen to go on tour with heavy music legends M.O.D. through the U.S. in support of their latest release "THE FEW, THE PROUD, THE BRUTAL," produced by NYC hard-core legend BILLY MILANO of S.O.D./M.O.D. fame.

In 2002 and 2003, NEW SOCIETY OF ANARCHISTS was chosen to be the supporting act for heavy music legends D.R.I. on their 20th anniversary tour "20 DIRTY ROTTEN YEARS" throughout the U.S. which has been one of the band's greatest accomplishment yet. Doing two consecutive U.S. tours with D.R.I. Stemming from the east coast to the west coast and back, NEW SOCIETY OF ANARCHISTS captured audiences nation-wide with their original brand of hard core making new friends and fans making a strong name for themselves like never before.

In early 2004 NEW SOCIETY OF ANARCHISTS spent many relentless hours locked in the studio recording, mixing, and mastering new material for their latest album entitled "COME OUT SWINGIN'" which is by far the best and most brutal product the band has ever released.

Gagged By The Flag

The Few, The Proud, The Brutal