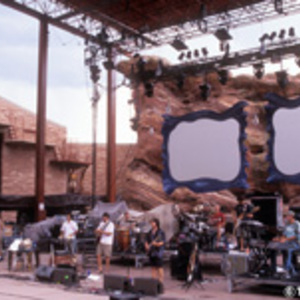 New Monsoon represents the best of the San Francisco jam scene. Formed during the El Nino rains of Northern California in the late 90's, this band has distilled their original sound with top-flight musicianship, tireless live performing and a thoroughly open-minded musical perspective. NM's unique style blends free-flying rock with acoustic stylings, tight vocal harmonies and lyrical songcraft. With a fearless pioneering spirit, they've become one of the most cutting edge bands on the scene today.

"New Monsoon was formed around Bo Carper's acoustic finger-style picking and the sharp, driving leads of electric guitarist Jeff Miller. The interplay of warm acoustic tones and charged electric bite-born from a shared love of Led Zeppelin III-has remained at the heart of its sound through various line-up changes, now a streamlined quintet with Phil Ferlino (keyboards), Marshall Harrell (bass) and Sean Hutchinson (drums). New Monsoon is built on the pillars of the 60's SF scene-a healthy dose of improvisation, a psychedelic character and a broad stylistic reach-without expressly emulating anyone" - Dennis Cook, Relix Magazine

"They have a collective power that comes off as a real unified force on stage..It's not just a band, you know? It's something transcendental" -Michael Shrieve

"Fluid flights emerge from many of the album's (New Monsoon V) best tracks-vivid songwriting fuseed with reemerging themes of search and discovery-they hang humbly from well-fortified compositions." -Jamie Lee, Relix Magazine
"This diverse cast of coconspirators speaks to the range and simmering possibilities within New Monsoon's framework, a creative space that embraces instrumentals as well as dead solid songcraft. They are comfortable with complex, genre-scuttling wordless fare that blends World music with heavy metal and Nashville pickin' but is equally at home with road tales that drag us to "Alaska" or up "On The Sun" with words that echo the encompassing good will and philosophy of Robert Hunter and Jerry Garcia." -Dennis Cook

Their new album, aptly titled "New Monsoon Live," was recorded during an epic 3 night run in Texas last September. Building upon their most successful studio album to date, "New Monsoon V," this live two-CD set is the band's first official release from the current 5-piece line-up, and their first live album since 2004. New Monsoon Live captures the band reaching one of their highest emotional, technical, and musical peaks.

"New Monsoon Live is defined by its powerful melodic sense and commitment to the spirit of the songs. The jam or solo always serves the song, not the other way around. There is no aimless noodling to be found here, no wasted notes." -Rob Johnson, Hittin' the Note

Live at the Telluride Bluegrass Festival