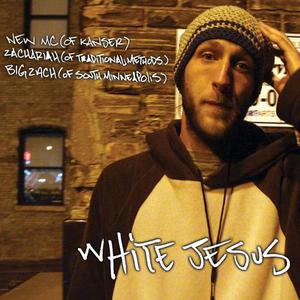 New MC (a.k.a. Big Zach) is a longtime staple of the underground hip-hop movement in Minnesota. As a teenager, Zach jumped on the scene early with his crew the Kanser Troop, playing coffee shop shows and opening for Twin Cities pioneers such as Urban Atmosphere (now known as just Atmosphere, of course) the Abstract Pack, the Micranots, Musab, and others. In 1997 Kanser pushed over 1,000 copies of Now, an album produced on Atmosphere producer ANT's 4-track and dubbed by hand to cassette.

By age 20, Zach was booking/hosting and co-running "Headspin Sundays," the now-legendary all-ages Hip Hop weekly held at the late Bon Appetit Cafe?it was an event that launched the careers of many in the current Twin Cities hip-hop scene. Groups like Brother Ali, Odd Jobs, Unknown Prophets, DJ K-Salaam, and Leroy Smokes are just a few of the many bands that played Headspin Sundays.

"It all started a few years back at Bon App / me and Son hooked up and started to rap" ? Big Jess of Unknown Prophets

"Me and Aaron Money used to rock Headspin / Been catching wreck off the rep ever since" ? Brother Ali

"I remember Headpin at Bon App / I used to get nervous when Zach would grab the mic / and ask the crowd, 'Where the MCs at?'" ? P.O.S.

Zach is a founding member of the Interlock crew, a collective whose ranks have included Heiruspecs, Carnage, Odd Jobs, Twisted Linguistics, Kanser and more. Throughout the late '90s and early '00s, Zach put out numerous underground tapes, CDs, and 12 inches with Kanser and Interlock, building a small but loyal following throughout Minnesota and the Midwest.

At age 24, Zach reinvented himself by starting a new band called Traditional Methods and featuring Heiruspecs bassist player from Sean McPherson and singer/MC Sarah White. Traditional Methods' politically-fueled and spiritually motivated music got a quick, hot buzz around the Twin Cities' Metro area. The release party for their one and only CD Falling Forward drew nearly 800 people to First Avenue's mainroom in June of 2004.

"Sarah White is one of the best female MCs in Minnesota and New MC never sounded so good" ? City Pages

Just as "Eight Mile" began to raise the profile of battle rap in early 2002, Zach began hosting the most legendary MC battles ever held in Minnesota, events that took place at Dinkytown's Loring Pasta Bar every third Monday. After stepping down as host, Zach won the one-year anniversary Battle at the Loring in February of 2003. Since that time, he's won the Midwest Showdown MC Battle at First Ave in September 2003, the MC Battle at the Twin Cities Celebration of Hip-Hop in 2004 and 2005, the regional round of the Scribble Jam MC Battle in Minneapolis in 2004, going on to represent Minnesota at Scribble Jam in Cincinnati.

Beyond all the awards and accomplishments, though, lies more than a need to simply stock his shelves with trophies and albums. Zach reps the Midwest and real rap music with a fierce do-it-yourself ethic and a genuine desire to build with all kinds of people, and that's what's led he and his group Kanser to tour harder than ever over the past five years, doing hundreds of shows and selling thousands of records independently.