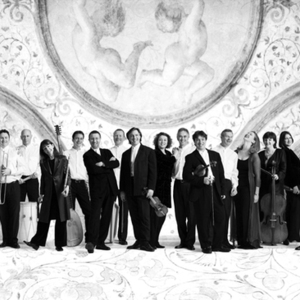 The New London Consort (= NLC) is firmly established as one of the world's leading early music ensembles with a uniquely wide and colourful repertoire of Medieval, Renaissance and Baroque music, much of it unpublished. Directed by Philip Pickett, the NLC has an enviable reputation for the flair, versatility and virtuosity of its members and for consistently presenting interesting and carefully planned programmes which combine the very best in scholarship and entertainment.

The principal artists, all established soloists in their own right, share a rare unanimity of purpose and style, resulting in the NLC's undisputed reputation for artistry, flair and virtuosity. Their concerts and recordings, while frequently including first modern performances of unpublished, undiscovered or reconstructed masterpieces, also shed unexpected and often controversial new light on more familiar works. The NLC is a regular visitor to major festivals and concert halls throughout the world, and as well regularly performs at the leading British arts festivals and has undertaken five nationwide Early Music Network tours.

In recent seasons the NLC has appeared at major festivals and concert halls throughout most of Europe, Hong Kong, Israel and America. In 1988 Philip Pickett was appointed Director of London's Southbank Summerscope Festival of Medieval and Renaissance Music (Picketts's Pageant) and the NLC gave 8 of the 32 concerts as ensemble in residence. In June 2005 the NLC performed J.S. Bach's Johannes-Passion (BWV 245) under direction of Philip Pickett at the Israel Festival Jerusalem.

Virtually all of the NLC's repertoire has been recorded by BBC Radio 3 (more than 120 programmes including eight Prom concerts), and members of the NLC have provided music for many BBC Radio Drama productions. On television the NLC appeared in 4 programmes in the Music in Time series; a recital of medieval music was filmed in Scotland for the BBC2 Music in Camera series; the NLC was heard on Channel 4 providing the music for six animated films of bawdy tales from the Decameron; the NLC took part in both of the televised Westminster Abbey Purcell Centenary concerts in 1995; and members of the NLC were seen and heard in half of the BBC TV Shakespeare productions. Major film soundtracks include Hamlet, Lady Jane, Robin Hood Prince of Thieves, Charlton Heston's A Man for all Seasons, Nostradamus and Elizabeth. Much of the NLC's repertoire has already been recorded including a selection of dances from Terpsichore by Michael Praetorius and all the songs from the original Carmina Burana manuscript which won Edison Awards in 1988 and 1990. The NLC has also featured on albums of their own vocal soloists such as Catherine Bott's Virtuoso Italian Vocal Music. Since 1985 the NLC has recorded exclusively for Decca, and with permission has recorded a series of CDs for LINN Records and a CD of Music for Queen Mary with the Choir of Westminster Abbey.