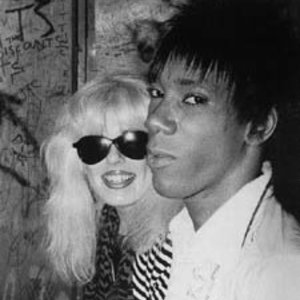 Biography: Neon Leon (real name Leo Matthews) was a NYC punk scenester in the early days, and if you see Max's Kansas City flyers from the heyday you'll often see him gigging a night or two before or after some legendary band. He also shows up in Rock Scene magazine, as most NYCenesters eventually did, thanks to the photos taken by Paul Zone (of The Fast) and Jayne County's advice columns. Though his recording career was short it was notable for the musicians who joined him and a string of non-album singles.

He debuted with the single 'Moving In the Right Direction' in 1981, followed by Las Palmas in 1982 which boasted a guest appearance from The Rolling Stones' Mick Jagger and the following year released his debut album in 1983, Artificial Stimulation again featuring Jagger but also boasting an appearance from Clem Burke of Blondie. That same year saw the release of the single 'Chances' and in 1984 released his final single and release, 'Girls, Guns and Money' (as Neon Leon and the Bondage Babies). He can also be seen playing with Johnny Thunders on a volume of the Japanese video series Under Underground.

Alternate Biography:
After several years in the hectic New York music life playing from blues, punk and rock, and touring around America with for example The Rolling Stones, Leo Matthews became tired of the "Big Apple"" and moved in 1988 to Stockholm.
Now its Scandinavia's turn to be conquered.
In 1983 he released his first album on Warner Bros. under the name "NEON LEON", Artificial Stimulation. On this album his friends from New York Mick Jagger and CLEM BURKE from Blondie participated among others.
He has also been touring Denmark, Finland, Norway and Sweden with "REGGAE MESSENGER" The name NEON LEON was dropped in 1991 and changed to the name we know today King Lion. KING LION had a new manager, the style was changed, and the band put aside for a solo career. With a strong new image, the single GYPSY WOMAN" was released in Sweden, Norway, Denmark and France on CNR Records.
The single smoked in The Swedish hit list at no.3 and in Denmark at no.8 !
The next year followed the single CAN'T HELP FALLING IN LOVE WITH YOU, which didn't have the same chance because UB40 had the same idea.
In the meantime the public's ears were opened up for this American singer and toaster, who's family was split between New Jersey and Jamaica. Actually there aren't many days in a year that go by that KING LION's name doesn't pop up on a poster, somewhere in Scandinavia.
One warm spring day in 1999 KING LION's managers phone rang.
HIP CAT Studio in Kolding, Denmark had a problem. The music was recorded, but the words, title and vocal were missing.
KING LION went to the studio the same day, and they were home, along with the female vocals of MARIA HECT from Sound Of Seduction, he had created a new hit, and a new epoch for KING LION had begun.
Dance Production team DAN TRIBE composer of KENN THE KILLER" (from DR.BAKER), RONNIE "NME" VEILER and MICHAEL SKOUBOE. Together with KING LION brought to us the summer hit I LOVE THE MELODY.
"I LOVE THE MELODY" was released in more than 60 countries and a hit in many of these.
In the spring of 1995 a new single was released. THIS IS MY LIFE written by the famous Danish singer Kim Larsen. It became Danish Radio Hit No.1.
In the summer of 1995 the album IT'S GOOD TO BE THE KING was released along with the double single AL NIGHT LONG and MONTEGO BAY. Once Again the rest of the world showed big interest!
What is not widely known is 'I HATE THE MELODY' with KENN THE KILLER, JUMP DOWN WITH NME3 and 'WILD, WILD, WHISTLE' with TEQUILA were all sung by KING LION for D.P.D., SONY MUSIC.,
To make it short and sweet, we can say he's a great musician and entertainer, who has many strings to play upon, He ususally goes with his playback show together with the two beautiful models, singers and dancers SOLVEIG (from SKORE KAJ) and CAROLINE.
But it's also very important to keep contact with the man on the street. Therefore he takes his guitar under his arm and tours internationally with his KING LION UNPLUGGED SHOW.
In 1998 he toured with THE SKY JUICE BOB MARLEY BIRTHDAY SHOW.
Germany has now begun to open it's eyes for KING LION, which resulted in a string of jobs in 1999.
Right now KING LION is working hard on a new CD album for spring release...