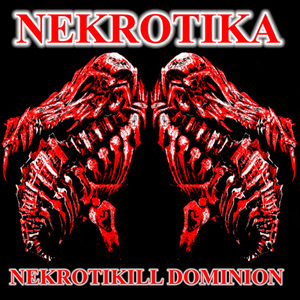 Spawned in 2002, Nekrotika was formed in New Plymouth, New Zealand and has had many members. The first line-up was a 5-piece that was hacked apart and reduced to a 3-piece, who recorded the first album "Destroyer of Worlds". That was released on a limited edition run by Demon Nation Music in 2003, recorded live to no-track it quickly became a must-have item amongst metal fans in New Plymouth and a few copies found their way around New Zealand via live shows. It was rough, raw, brutal and bloody.

Shortly after that another guitarist was added and as a 4-piece Nekrotika recorded the "Nekrotikill Dominion" album. It took longer to set up the mobile recording studio than it did to record the whole album. The 1-take wonders tried to put overdubs on the album, but there was no need, it was as heavy and brutal as it needed to be. After almost 2 years of being unable to mix it due to the producer's other commitments, the album saw the dark of day. Despite some line-up changes the band were back on the live gig scene and slaying audiences with their no-frills "death metal played by punk rockers" style.