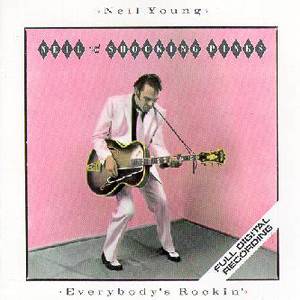 In 1983 Neil Young proposed the album Old Ways to be released at Geffen Records. Geffen Records, who were already unhappy with the first album Young did for them, Trans, refused it 'cause it sounded 'too country'. They did however like the 'rockabilly' songs that were on the album and since some old rockabilly songs had made it back into the top 40 recently they asked Young to explore the genre a bit further.

Young founded the Shockin' Pinks pretty much on the spot and recorded the album Everybody's Rockin' in one day. He mixed it the same night too. It's running length was less than 25 minutes and some-one seemed to appreciate the joke Young seemed to intend. Except it was no joke, it was revenge for Old Ways. Geffen didn't appreciate the joke either and sued Young for making noncommercial album like this one. He did tour with the Shockin' Pinks though, albeit they only showed up for an encore (who else would do that except Neil Young). The band consisted of Neil Young (piano, guitar, harmonica), Ben "King" Keith (alto sax, lead guitar), Tim Drummond (upright bass), Karl Himmel (snare), Larry Byron (piano, backing vocals), Anthony Crawford (backing vocals) and Rick Polombi (backing vocals). The band later re-incarnated into the International Harvesters.