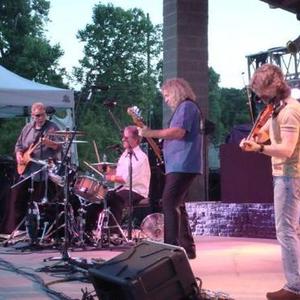 * Billy Greer - Bass and Vocals * David Ragsdale - Violin * Phil Ehart - Drums * Richard Williams - Guitar Not long ago, the members of Kansas found themselves in a bit of an uncertain situation, to say the least. "Three to four years ago, the main writers for Kansas - Steve Walsh and Kerry Livgren - stated that they would no longer be writing for the band Kansas," explains drummer Phil Ehart.

Not long ago, the members of Kansas found themselves in a bit of an uncertain situation, to say the least. "Three to four years ago, the main writers for Kansas - Steve Walsh and Kerry Livgren - stated that they would no longer be writing for the band Kansas," explains drummer Phil Ehart. "That didn't mean that Kerry might not write a song or two for a special project, but that the two of them were done writing any album length material for Kansas. The four of us decided that we were not done yet, and Native Window was born to scratch that 'new material itch'."

Soon after, Ehart found himself with his other Kansas bandmates, Richard Williams (guitar), Billy Greer (vocals/bass), David Ragsdale (violin), to see if the non-Walsh fronted line-up could work. It turns out it certainly can, according to Ehart. "We had no idea what it would sound like! We had one criteria - the song had to sound good acoustically. If it sounded good with just acoustic guitar and vocals, then we developed it from there."

On June 23rd, Native Window will release their self-titled debut album via StarCity Records (run by Jeff Glixman, who produced some of Kansas best-selling releases). Produced by Steve Rawls and Native Window, the album will certainly grab the attention of longtime Kansas fans, as well as admirers of smartly penned, melodic rock. "We could all carry a tune and sing in pitch," says Ehart, "But could we actually sound good together? It took some work to get over the hump of singing harmonies, but once we did, you couldn't shut us up! The lyrics were a total group effort. Someone would have a title, a one liner, a chorus, and the lyrics just sprung from there. Sometimes Billy would have a bunch of lyrical ideas, and we'd brainstorm from there." Greer himself also offers nothing but praise about the newly launched band. "The writing and recording process on this project was more rewarding and fun than any I have been involved in a very long time. Vocally, this was one of the most challenging and rewarding CD's I have ever recorded!"

Ehart also cannot stress the importance of having Rawls behind the boards, which served as a catalyst for getting the new group on track and moving forward. "Steve Rawls was the guy with us at Real 2 Reel Studios, and made sure we didn't go completely off the deep end in the creative process. He pushed us a lot to try things that were a stretch for us. We couldn't have done this CD without him." Ehart also offers to dispel any rumors that the birth of Native Window may have rubbed Walsh the wrong way. "Steve has been very supportive of Native Window since it's inception. He has wished us the best since day one."

As fans will learn upon giving 'Native Window' a spin, the long-time Kansas mates have come up with an incredibly consistent album from front to back. This is sentiment that Williams agrees with. "'Blood in the Water' is the most fun to listen to for me. It was truly conceived, moment-to-moment, the four of us sitting in the studio throwing ideas against the wall and using the ones that stuck. On the other hand, much of this CD was done that way. Personally, I like the entire thing."

As one of the bands that virtually helped create the now common phrase 'arena rock,' Kansas has sold millions of albums worldwide. Kansas has been a top concert draw since the 1970's, when they stormed the charts with such hit/classic albums as the quintuple platinum-certified 'Leftoverture' and the quadruple platinum certified 'Point of Know Return,' as well as perennial rock radio favorites "Carry On Wayward Son" and "Dust in the Wind." The group's large and loyal following has remained in tact throughout the years, and Native Window will undoubtedly benefit from this, as the new group will be formally introduced to fans by pulling 'double duty' - opening a summer's worth of tour dates for Kansas. Ragsdale offers his prediction of what the live Native Window experience will be like. "Sheer panic! Actually I'd hope that they can expect a very fair representation of the material wrapped in a presentation of the professionalism, energy and enthusiasm - that only hours of travel and sleep deprivation can administer!"

Within Native Window, the spirit of Kansas is alive and well.