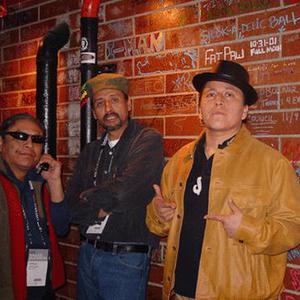 Native Roots was formed in 1997 by musician John L. Williams (Sisseton-Wahpeton Sioux) and lyricist/vocalist Emmett "Shkeme" Garcia (Santa Ana Pueblo) to reach out with a message of pride, unity, and respect among all nations, through the universal language of music. This dynamic and award winning combination has produced three CD's that have propelled Native Roots into the Native American and Reggae music scene as the premier Native American Reggae band whose music is 100% Native American written, produced, and performed.

Native Roots contributes their solid reggae foundation to the influence it has had on Native American communities. Native Roots is a natural extension of growing up, living and loving reggae music. John Williams' extensive musical background in working with different styles of music has allowed him to incorporate various elements into the music without compromising the essential reggae feel. In addition, "Shkeme's" singing style reflects not only a variety of reggae styles, but also relects years of experience singing both traditional pueblo and pow wow music. The blending Native influences such as traditional drums, rattles, chants, language and flute, with a variety of reggae styles including ragamuffin, one drop, rockers, and dancehall, makes Native Roots music unique. Lyrical themes include the importance of traditional languages and culture, spirituality, respect for our elders, the sacredness of our youth, and love.

Native Roots has played at an array of venues over the years, some of which include; Winter Olympics in Salt Lake City, Sundance Film Festival, Bob Marley Music Festival in Phoenix, Native Roots and Rhythm Festival in Santa Fe, New Mexico, Gathering of Nations Pow Wow in Albuquerque, New Mexico, Cherokee Tribal Fair in North Carolina, Seminole Tribal Fair in Florida, Havasupai Peach Festival in the Grand Canyon, and the National Museum of the American Indian, Washington DC. Native Roots was honored to be a part of a cultural exchange and performance series in New Zealand in 2006. Additionally, Native Roots has worked with popular reggae bands such as Israel Vibration, Burning Spear, Toots and the Maytals, and Fully Fulwood as well as Native artists such as Robert Maribal, Keith Secola, and Indigenous.

"Celebrate" is a very appropriate title for their third and most recent CD. It is a representation of the spiritual and musical growth that Native Roots has experienced. True to the Native Roots style, there is both variety and musical quality. The inclusion of "top of the line" guest musicians from the Albuquerque area bring a special treat to the ears. The lyrics are both positive and conscious, and emphasize all the good things in life that warrant celebration.

Look out! Native Roots is in the house! Give thanks and praise to the most High!