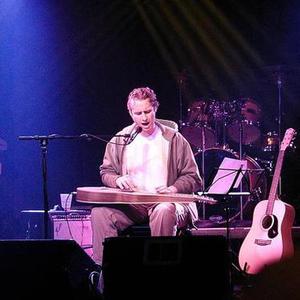 "What is that instrument he's playing?" That's usually one of the first reactions to Nathan Miller. For the record it's an acoustic lap slide guitar. Its roots are from the 20s and 30s when Hawaiian music was all the rage. Today Nathan uses it for everything but Hawaiian music (maybe one day though). One listen and you wont care what instrument Nathan Miller is playing, but you will want more. Nathan Miller began playing guitar after hearing Jimi Hendrix's ?Purple Haze? on a record his mother bought him when he was 12.

Nathan Miller began playing guitar after hearing Jimi Hendrix's ?Purple Haze? on a record his mother bought him when he was 12. That Hendrix record would lead him on a search to find all of Hendrix's influences. It was there, in the search for inspiration, that he fell in love with the blues. ?I'd say from about the time I was 13 until I was 20, or so, all I listened too, and all I played was blues music.? Cutting his teeth on Albert King, Albert Collins, Son House, Charley Patton, and contemporaries such as Stevie Ray Vaughan, Johnny Winter, and Chris Duarte, Nathan began getting friends together to jam whenever he could.

After High School Nathan reluctantly attended the University of Minnesota where he was introduced to hip hop music by some friends in the dorm. Those friends he met where in the popular Minneapolis hip hop group The Oddjobs (currently known as Kill the Vultures). They introduced Nathan to a whole new world of music by taking him to house parties, and concerts. ?They showed me the most amazing emcees and ever since I have been influenced by these great hip hop artists.?

It was also during this time where Nathan began straying away from the blues music he loved so much. Finding no real place to take the music in the confines of 12 bar shuffles, and I-IV-V chord progressions, Nathan found himself at a crossroads for what he wanted to do with music. He says, ?I just kept playing all the time thinking all these licks all these songs this entire style has just been done to death. My blues heroes wouldn't want me copying them, they would want me to innovate, to make my own blues.? So he put away the electric guitar and turned his focus to songwriting.

After woodshedding for a couple years Nathan had himself a handful of acoustic shows under his belt and a new batch of original songs but he still wasn't happy. He needed something to change, that all came in the form of some industrial steel, an art project, and a $35 acoustic guitar pickup.

Nathan had always been interested in lap slide guitar, and its voice like qualities. ?I was always a little afraid to approach it, for whatever reason.? In a metal sculpture class in college, Nathan's professor came up with a class assignment to make a playable instrument out of found metal objects. ?This was my chance to play lap slide guitar, and it didn't feel as intimidating because I only made it with 3 strings.? From the moment he played it for the class, he knew he had found the voice he was looking for.

Picking up more and more people at live shows, Nathan decided he needed a band. ?That was always the end goal. A band. I knew I had to move a crowd by myself first, then I could get some noise behind me to hold everything down.? He found his band in bassist/vocalist Dan Ristrom (U of MN Duluth music major, and son of local jazz guitar great Ruben Ristrom), drummer Peter Day (formerly of Root City Band), and percussionist Miles Hanson (IPR music school graduate, producer, and engineer). Known to themselves as Unstoppable Company they began playing their first live shows with Nathan in July of 2005. Gaining notoriety quickly they have already shared the stage with The Gear Daddies, Mint Condition, The New Congress, Root City Band, Lowen & Navarro, and many more.

Spending a year making the debut album Nathan Miller comes at you with 12 original compositions, and a production team he is a part of alongside producers Matt Eckholm and Miles Hanson. Nathan and the aforementioned producers spent months editing, mixing, re-mixing, and mixing again, to bring you ?Bombs and a Hustle.? The album is the culmination of Nathan's vision and progress. ?It is a perfect representation of where I am right now musically, and emotionally. I'm just blessed to have such great people around me to influence and drive me in the music.?

Bombs and a Hustle