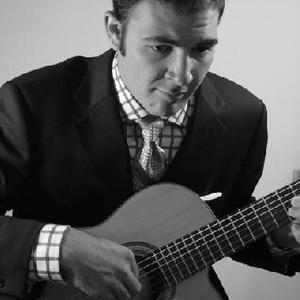 Nate Najar is a multi-talented American jazz guitarist-composer-producer and international recording and touring artist. With a special affinity for melodic interpretation, and a rich songbook of recognized standards and inventive originals, this is one cat who owns every audience ? 8 to 89 ? from the moment he strums his first notes. Grounded in classical music, with a distinct affinity for Jazz, Latin, Blues and Gospel stylings, Najar considers himself a product of his many passions.

A student of jazz from Antonio Carlos Jobim's Brazilian rhythms to the stylistic genius of guitar and piano innovators including Barney Kessel, Django Reinhardt, Oscar Peterson and Bill Evans ? Najar considers musicality central to his compositions and performances. Seeing the acoustic guitar as a piano, he elicits remarkably rich and unique sounds that are the result of his ongoing mastery of the finger-style nylon string technique for the classical jazz guitar.

Exclusively finger-style nylon string jazz players are relatively rare these days, says Najar, who cites Jay Berliner, Earl Klugh, and Gene Bertoncini alongside the late Laurindo Almeida and Charlie Byrd as artists who influenced his musical development. Early on, the music of Charlie Byrd became his mainstay. Though the two never met, Najar immersed himself in the study of Byrd's music and techniques, ?I like the elegant simplicity of what he plays, yet it always sounds like just the right way to do it.?

The stage is clearly Nate Najar's throne and live performance his passion. Whether as a featured solo performer, making an intimate audience connection with a collaborative jazz trio, or leading a high-energy contemporary jazz band through its paces, Nate is the man! Having developed his professional chops early on in pickup jazz dates before he was old enough to drive, leading to gigs at Washington D.C.'s Blues Alley and the world renowned Kennedy Center, and further honing his audience skills on the international jazz festival and club circuit from Dubai to California, Najar is uncommonly expressive and versatile.

Swinging With The Nate Najar Quartet