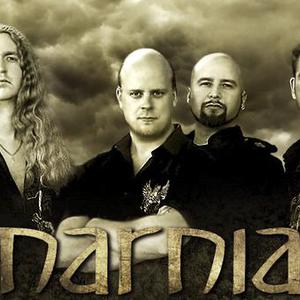 1) Narnia is a heavy metal/power metal band from Sweden. Their trademarks are their generally fast tempo, uplifting vocals, and the neo-classical playing style of guitarist Carl Johan Grimmark. The current lineup features Germ?n Pascual on lead vocals, CJ Grimmark on guitar and backing vocals, Andreas Johansson on drums and Andreas Olsson on bass. On a side note, former lead singer Christian Rivel runs the Swedish record label Rivel Records, which features mainly melodic/heavy metal, but has also released CDs from anomalies such as the black-metal band Crimson Moonlight.

On a side note, former lead singer Christian Rivel runs the Swedish record label Rivel Records, which features mainly melodic/heavy metal, but has also released CDs from anomalies such as the black-metal band Crimson Moonlight.

In April 2010, the band posted a message on their myspace-profile, in which the band announced the end of their activities after a "grande final" in the same year.

2) Narnia was a British folk band who recorded his sole eponymous album in 1974.
Hyped up by dealers worldwide as a masterpiece of acid-folk, this has a few arresting moments, but is generally overestimated. The main problem is the compositions, which do not render anything not heard before elsewhere. At worst they are trite and lacking of depth, at best they are agreeable as on Agape and on by far the best track Living Water. The playing is good, while the lyrics have strong religious undertones. Pauline Filby sings very well, but often sounds uncomfortably like Dusty Springfield while the overall sound is reminiscent of The Seekers. The most positive effect of this album could be that one may want to re-read the excellent Narnia Cycle by C.S. Lewis.

In June 1972 the band Agape formed featured John Russell and Pauline Filby. Filby had been married for some time to Jack Filby who was a vicar. They formed a folk duo after their marriage and lived in Cliff Richard's home in Essex, which was a Christian Arts Centre. Pauline had been a folk singer for a few years before she married.

(Quote from "The Tapestry of delights" book by V. Joynson)

From Darkness To Light

Course Of A Generation