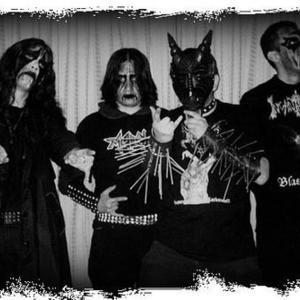 During the fall of the majestic hecatomb 1995 (October), from the ashes of SKELETON, Brutal Death Metal Kult (1991 - 1992). The Nahual horde rises to torment with its sonic storm the hearts of the weak and hypocrite, thus for destroy the heads of ignorance and the ignominy to create the wildest dismal and ritualistic pack that has ever been seen around these quiet lands. In the hecatomb of 1996 (January) Nahual releases their first bloody Opus: ?Coven?, from which have been sold-out and distributed 1000 copies until the day.

In the hecatomb of 1996 (January) Nahual releases their first bloody Opus: ?Coven?, from which have been sold-out and distributed 1000 copies until the day. After the release various holocausts were organized, starting with the tour-extreme-killing ?Nights of Coven?, with the panamanian band DISEMBURIED, through the cities of Huancayo and Lima. Nahual played for the rest of the hecatomb in the city mentioned last.

At the birth hecatomb of 1997 the band releases their second Opus ?Abomination des Sorciers?, a premonitory vision of what would be their next discharge, ?Mysteries of the Cosmic Serpent?. This ADV of 500 copies of limited edition was rapidly distributed in Argentina, Colombia, Ecuador and Chile. However, the band went trough some internal problems, which were solved during the hecatomb of 1998 with following line-up: Lord Tiranna (vocals), Scharack (guitars) and Meister Marbas (drums)

?Sat?nica Redenci?n? (1992-1999) is their third bloody Opus, released by MAGISTELLUS INFERNAL PRODUCTIONS. This production represents in some way the history of Nahual, with hymns in concert, during rehearsals and studio, recorded throughout the band's career and before when SKELETON existed.

In this audio-cassette of limited edition -only 100 copies (sold out)-, two new hymns are presented: ?El Castillo Trimensor?, and advance of their sixth bloody Opus ?The Dragon of Trimensor Castle? (now available under the next name: Massive Onslaught From Hell), and ?A Night in the Woods? from their fourth bloody Opus ?Mysteries of the Cosmic Serpent?. There is a second limited edition release of 333 copies of ?Sat?nica Redenci?n? (Sold Out).

In the hecatomb of September 1999, Nahual enters at the studios of John Aggressor (HADEZ) to record the hymn ?El Castillo Trimensor? (new version) for a compilation produced by SYSTEM BEYOND RECORDS in which are included peruvian bands such as HADEZ and MORTEM....

In early hecatomb of 2000, SYSTEM BEYOND RECORDS OF U.S.A. (now R.I.P.) signs a contract to record ?Mysteries of the Cosmic Serpent? (CD adn Cassette) which contains eight hymns full of apostasy and total paganism, to the profane cults and the creation and the War of a true elitist society. System-Beyond only released the Cassette Version limited to 1000 copies.

In hecatomb of August 2000, PROFANE ELITE PRODUCTIONS (now R.I.P.) propose Nahual to record a limited edition Split-CD of 333 copies along with the ecuadorian warriors of MUTILATED CHRIST. ?Triumph of the Black Hearts? is the name of their fifth bloody Opus containing 4 hymns of DISMAL NEFASTOUS BLACK METAL.

In the 2001 is edited the LP vynil comp. tribute to SABBAT (Japan) with the participation of Nahual, Gorgon, Desaster, Lament, Celestia, Imperial, Metal Inquisitior, .... under the label Live Recordings attack from Brazil (now absolutely sold out).

Unholy Thanks to our comrade and warbrother Crepusculo for your great and amazing support!!!

To the middle of 2002 MIP edited the version in cassette of ?Triumph of the Black Hearts? limited to 100 copies in red blood paper under BLOODCULT SERIES!!!

In the 2003 the rehearsals are begun for the second album of the band, titled "Massive Onslaught From Hell" and they are played in some concerts inside the Peru.

for the 2004 Nahual thanks to the support of Ritos de Muerte Zine a tour is made by Ecuador at the end of April of Three dates, playing in the cities of Loja, Guayaquil and Quito. After this Nahual enters the Session Studios again to record the songs of the "Massive Onslaught From Hell" and two songs but for the 4 way split CD "Recrucifixion". For July the 2004 under Magistellus Infernal Prods release the second album of Nahual in limited edition to 500 copies, those which the 100 first they come with slipcase and embroidered patch. Quickly it has been distributed all over the world (to see Worldwide Distro). For November of the 2004 the version in Cassette is available under Oniric (Spain) limited to 300 hand-numbered copies and it includes two reh's bonus tracks. excellent layout with lyrics and new cover art!!!

released under ASF/GOH the evil opus: Hail Satanic Vitory!!! Ten years of Strength, Hate and Pride in the name of Satanic Supremacy!!! with 4 new tracks + bonus tracks from demo tapes, lives and reh's; limited edition to 500 copies, Sold out now!!!

in the years 2005 - 2007 the band only play in live concerts with bands like Hacavitz and Unearthly... and the first rehs for "The Scaffold of the Dead" new album...

for the 2008, under A Sangre Fria Recs; the two first demo tapes finally are available on CD format... limited edition to 200 digipack + 300 normal CD..

for November Old Cemetery (USA) released the new version of the "Apostasy Act" in this time on CD format, include more live bonus tracks... limited edition to 1000 copies...

Finally to the end of 2008, A Sangre Fria Recs released the new full-length: "The Scaffold of the Dead"

Nahual the regiment of Warhate Front is:

Mysteries Of The Cosmic Serpent