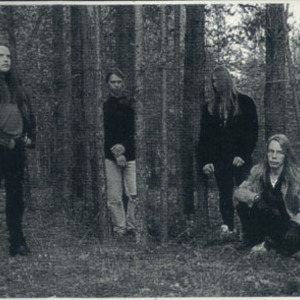 There are several bands called Mythos. 1) New-Age from Canada. 2) Death Metal from Finland. 3) Krautrock/Progressive Rock from Germany. 1) Mythos is a new-age band that plays semi-acoustic instrumental music that combines various Western styles; female vocals are used as just another instrument. Most of their tracks are contemplative, often slightly sad, with finely detailed sound. The band was founded by two Canadians, Bob D'Eith (keyboards) and Paul Schmidt (guitar); both received classical training on their respective instruments.

1) Mythos is a new-age band that plays semi-acoustic instrumental music that combines various Western styles; female vocals are used as just another instrument. Most of their tracks are contemplative, often slightly sad, with finely detailed sound. The band was founded by two Canadians, Bob D'Eith (keyboards) and Paul Schmidt (guitar); both received classical training on their respective instruments.

Mythos is a musical project started by Bob D'Eith and Paul Schmidt in 1996. Bob (piano) and Paul (guitar) collectively wrote, produced, and performed on the albums with the help of various session performers. The centerpiece of the Mythos sound rests on the acoustic guitar and piano, which are accented by haunting and powerful vocals. Tastes of different cultures are combined to achieve an ancient yet timeless ring.


2) Mythos was a Finnish band who played Death Metal.

The band existed from 1993 till the end of 2000. As the both primus motors of Mythos (Valppu & Hautaniemi) drifted apart, the band stopped recording, gigging and split up.

The bands first demo tape was recorded at Tico-Tico; Kemi's finest studio, during march '93 in 2 days and within 20 hours. It contained 4 tracks and an introduction by Jukka Valppu and Kimmo Korkala. Only 250 copies were printed at that time and they were sold in no time. The demo can be heard and bought on the "VOCIFEROUS & MACHIAVELLIAN HATE" compil.cd thru Evil Omen recs / Osmose... Many people still prefer the as the roughest and best release of Finnish deathmetal-power of that time it was released.

The album was also recorded at Tico-Tico, Kemi during a rainy and windy time period in fall 1994 - the wind blowed inside the studio aswell... "Pain Amplifier" was released thru Evil Omen recs / Osmose and it has been printed 5 times (each press 1000 copies) to the bands best knowledge and it has sold 4000 copies and is still selling... The label manager Ludo"Evil" never kept the band up to the date of the selling figures and always kept the finacial discussions such as as the paying of royalties in secrecy (only the 1st part of the royalties were paid as cd's) This eventually hurt the co-operation with Mythos and Evil Omen recs / Osmose. The french side severed all ties to Mythos, as an "dis-agreement" was manufactured by Ludo "Evil" & co, so that the actual conditions written and signed in the album contract (meaning: the paying of royalties...) could be left aside and that the band would "donate" its royalties to Evil Omen recs that they could release more albums... Evil Omen recs/Osmose also made Mythos t-shirts/ longsleeves without the bands approval and they sure made an awful design to it!

Toni Pekkala left the band shortly after "Pain Amplifier" was released , a replacement was not hard to find... Few guys came and went but the band took Sami "Kukeli" Kukkohovi and started making new tracks for eventual follower to "Pain Amplifier"... it was decided not to record anymore to Evil Omen / Osmose. Most of the tracks made between "Pain Amplifier" and "Dark Material" were not recorded or released, not that they were bad, no label was interested in our deathmetal during the "crazy- boom" of black metal...

The MCD was produced by our ex- guitarist / vocalist Kimmo Korkala, who had put together his savings and started "KTOK" - records... This is the first recording from Mythos at this more or less new studio - NEO STUDIO in V?livainio, Oulu... This 4- track mcd showed the bands progression in both, songwriting and in the soundquality... The band had welded together more catchier and grooving tracks with recoqnisable choruses and guitar solos... + the Heavy Metal - "feeling" was now rising its head. A masterpiece at that time, though many people complained about Mikko Laurila's vocal outlet... Some said they loved the whole cd, some said they loved the cd but HATED THE VOCALS... His vocal outlet had changed a bit but the one thing that divided listeners in 2 camps was Mikko's vocals... You either loved or hated them... !

As soon as we got the MCD out it was time for Sami Kukkohovi to leave the band... (find about that in the trivia section) After struggling with the rest of the members, Mikko Laurila was the next to call it quits... Mikko Rojola was found to replace. A young guitarist - Vesa Hietala came to play the lead guitar. Then Harri Paasovaara left. In came the bass talent LEDE from local blacksters Catamenia... Local "diehard-fans" thought that MYTHOS? days were done, due to this huge line-up change... No no no !!!

The band has got the soundpolitics in place though the guitars would've needed a bit more work! What can we say? It's 3 tracks intense and fast, not to forget, HEAVY deathmetal tracks that are nicely heavymetal-flavoured...! If you haven't heard, you've truely missed a bunch! At the time the tape didn't raise any interest of recordlabels... It was just the time BlackMetal raised its ugly head....

THE LATEST ,THE LAST AND YES... THE BEST RELEASE by the band!! With the line-up now steadily in place, we have established a good working relationship, and schedule for building new tracks... The band mixed influences from the old thrash metal to the already intense deathmetal outlet, that hasn't changed since the beginning...

"Pain Amplifier" is in plans to be re-released on vinyl aswell !


3) Mythos were an underground German band from Berlin. Their first albums "Mythos" (1972) and "Dreamlab" (1975) were firmly in the krautrock vein: dreamy psychedelic/space rock with acoustic instruments adding a bit of oriental flavor to the mix. Then they moved to a more mainstream sound.

Origin Berlin, Germany
Years active 1969 - 2007
Genres Rock/Krautrock
Mythos were a German band formed in Berlin by vocalist and multi-instrumentalist Stephan Kaske, bassist Harold Wei?e and drummer Thomas Hildebrand in 1969. All high school dropouts, the self taught musicians released their eponymous debut in 1971. Influenced by Pink Floyd, Ash Ra Tempel and Hawkwind the album draws on science fiction and ecological themes particularly noticable on the closing track "Encyclopdia Terrae". The release saw the band support Family, Colosseum and Humble Pie on tour, however after three year the band split. Kaske then recruited Axel Brauer on drums and Michael Krantz on bass. The band wrote and played live for two years but failed to record and split up. On his own Kaske signed, as Mythos, to Cosmic Chorus, and recorded various TV and film soundtracks before recording DreamLab in 1975.

In 1976 Kaske expanded the lineup to include Sven Dohrow on guitars, Eberhard Seidler on bass and Ronnie Schreinzer on drums. The band adopted a heavier sound and released two albums, Quasar and Grand Prix. Kaske left the band in 1980 in order to concentrate on setting up his own recording studio in Berlin and persue solo projects. Dohrow and Schreinzer formed The Twins, changing to a synth pop style and scoring a number of minor hits.

Mythos is today a solo project by Stephan Kaske

Tales Of The Fallen Empires