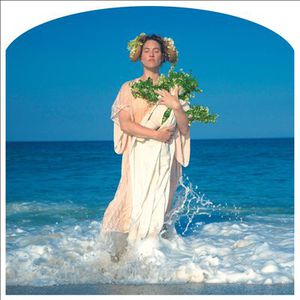 1) Amanda Louisa Kretz Lameche, known professionally as Amanda, (born March 24, 1985 in French Alps, France) is a French-born, Swedish pop singer who started getting involved in music after her family settled in T?by, Sweden. While taking dance classes, she joined the musical The Sound of Music and was soon singing "Little Stars" at Gothenburg's World Athletic Games. Amanda became the first young female pop act to sign with Madonna's Maverick Records, making her professional debut with "You Don't Stand a Chance", from the Rugrats in Paris movie soundtrack.

In 2000, Lameche recorded her debut album, entitled Everybody Doesn't and released it in 2001. The title track "Everybody Doesn't" was her first and only single to date, peaking at #81 on the Billboard Hot 100. There was a scheduled release for a second single, "Can't Stop My Love", but due to lack of album sales, Maverick cancelled the single and dropped Amanda. In 2006 Signature Records gave her a new record deal to record an album set for release in December 2007.

Amanda's younger sister Ana?s Lameche soon joined Laila Bagge's Swedish girl group Play. Amanda received writing credits on Play's debut single, "Us Against the World." When Play filmed a video for "It's a Hard Knock Life" in 2003, Amanda substituted for Faye Hamlin, who was sick at the shoot, in some scenes.

2) Written as AmAndA, this sextet evolved from the southwestern suburbs of Brussels, with a very theatrical (with some original accessories and decors) symphonic prog with a modern edge, but expanding a vast and humorous world, sung in French (and sometimes in Latin), which fascinates the audiences.

Their debut album Qui Est AmAndA? came out in 02, and the group slowly acquired a strong local following, their music sometimes reminding of a proggier Queen (Bohemian Rhapsody-like) and Ange. Two years later the group issued a single called Voil?, which would find a way of the future album. While their second album the excellent La Maison De Flore had to wait until 07, the group achieved another big project almost simultaneously, as they recorded in the Universirt? of Louvain La Neuve, their music accompanied by a 50 musician symphonic orchestra. This is also bound to be released soon.

3.) An Arabic singer that released a song named Feinak