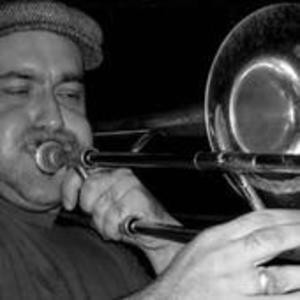 Gigi De Gaspari, a.k.a. Mr. T-Bone, is trombone player and singer with a very long musical career. Beginning in the late 1980's in Italy he established himself as a top trombone player in the international Ska and Reggae scene. His style and musicianship led to performances and tours throughout Europe, USA, Canada and Japan playing with such artists as Derrick Morgan, Willie Williams, Mikey Dread, New York Ska Jazz Ensemble, David Hillyard and the Rocksteady 7, Victor Rice, The Slackers, Tokyo Ska Paradise Orchestra, The Toasters, The Trojans, The Caroloregians, Dr.

Ring Ding, Eastern Standard Time, Casino Royale, The Bluebeaters, Africa Unite, and many, many others.

He also works as a composer, with several Italian film soundtracks to his credit as well as commercial music for TV advertisements broadcast in Italy, USA, Canada, and Puerto Rico.

In October 2010 Mr. T-Bone released his first instrumental album entitled Mr. T-Bone & Friends ? Instrumental Session Vol. 1 on Chicago's Jump Up Records. The recording featured many great artists Mr. T-Bone specially invited to record with him, such as David Hillyard (The Slackers), Kincaid Smith (Hepcat), Larry McDonald (The Rocksteady 7), Roger Rivas (The Aggrolites), Tommy Tornado (Rude Rich and the High Notes), King Django, and many others. The release of the album was celebrated in Europe in the Spring of 2011 with a tour where Mr. T-Bone was backed in different areas of the continent by the most important bands of the European Ska scene, The High Notes, The Caroloregians, The Upsttemians, and The Gramophone Allstars.

Mr. T-Bone is set to release a new vocal album with the Young Lions this October, which will be released by Chicago's finest label, Jump Up Records and distributed in Europe by the German label Grover Records. The release will be followed by a long tour of the USA, Canada, and Europe beginning in early October. Mr. T-Bone will be backed during the North American portion of the tour by Washington DC's greatest Ska-Jazz band, Eastern Standard Time. The tour will head west from Washington DC through the Midwest, and then north into Canada, culminating in a performance at the renowned Montreal Ska Festival. The North American leg of the tour will end in New York City, but Mr. T-Bone will fly back to Italy to join his band, The Young Lions, to embark on a six month tour of Europe, traveling to Italy, Spain, Belgium, The Netherlands, France, Germany, Switzerland, Slovenia, Czech Republic, and the Balkans.

Find out more and keep up with Mr. T-Bone through his website, www.mrtbone.com