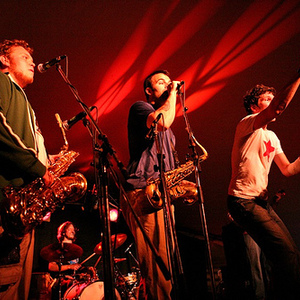 A little something for the body. A little something for the mind. Mr. Something Something represents four years of composing, performing, risk-taking, improving and ultimately mobilizing the original vision of founding members Larry Graves [drums/percussion] and John MacLean [saxophone/voice]. 20 years of playing, studying and traveling passed before these two childhood friends settled on the unbeatable dance rhythms of Nigeria, Senegal, Mali and Ghana as the most natural gathering place for the elements that would ultimately make up the Mr. Something Something sound.

Western instruments and concepts of improvisation are explored and layered over what used to be called afrobeat; but the term strains to contain the innovations happening in the rhythm section at every show. It also fails to express in fiery-enough terms the contributions of notable and electrifying vocalist/performance artist Johan Hultqvist. Breaks and basslines are designed to induce and sustain a state of ecstatic dancing. The horn section strikes with power and uplifts with melody. And above it all, acting as a lightning rod for the combined energies of a Mr. Something Something event, is the lyric statement of the case for change and consciousness. And dance.

2006 was another great year for Mr. Something Something. The band was picked up by Festival Distribution in Canada and Bomba Records in Japan. The addition of mesmerizing dancer and choreographer Jennifer Dallas heightened the intensity and the visual experience of the live show. The group also had the pleasure of welcoming JUNO Award winner Richard Underhill and his fellow Shuffle Demon (and 2007 National Jazz Award nominee for Best Saxophonist) Perry White into the Something Something family, and veteran world music organizer Derek Andrews took the group under his wing. CBC Radio One recorded the band live on two occasions, and CBC Radio host Matt Galloway chose sophomore album The Edge as his pick for the most underrated recording of 2006, adding that the charismatic crew is "even better live than on disc".

The fresh sound and powerful message of the band's second album The Edge led to a nomination for a 2007 JUNO Award for World Music album of the Year. The Edge received a lot of airplay on CBC Radio and college radio stations across Canada, and the critics were equally enthusiastic about the release. EYE Weekly's Ryan Watson calls it "an infectious blend of percolating polyrhythms, layered horn punches and hot-stepping basslines." In the Vernon Morning Star Dean Gordon-Smith writes that the music is "suggestive of hot climates, late-night clubland communion and head-swiveling propulsion." EXCLAIM!"s David Dacks states that The Edge has "broadened the scope of Afro-grooves", and in the same magazine Shain Shapiro writes that Mr. Something Something's high-energy live shows have "proved that they rank with any Afrobeat in the world today."

Aside from wildly energized and unpredictable live shows, the band is becoming increasingly well-known for its green politics and environmental activism. The band is planning to play a number of "eco-dates" in 2007, performing in such unconventional venues as organic farms, eco-villages and sustainable co-housing projects to highlight communities that are taking steps toward sustainability and smaller ecological footprints. "It is our intent to educate ourselves to a better and more sustainable lifestyle", says frontman Johan Hultqvist. "Hopefully this will inspire others to do the same."
Over the last two years the charismatic crew has toured relentlessly in Canada, playing more than 200 shows to enthusiastic crowds at clubs and festivals from coast to coast. Along the way they shared the stage with top Canadian artists such as Sarah Harmer, Martha Wainwright, The Trews, Bedouin Soundclash, Joel Plaskett, Justin Rutledge, and many more. The band spent the spring of 2007 in the studio working on their forthcoming third album, a collaboration with the explosive, Nigerian spoken word artist Ikwunga The Original Afrobeat Poet.

In the summer of 2007 the band will embark on a three-month tour that includes high profile dates in the U.S. as well as appearances at jazz and folk festivals all across Canada.

The Edge and Mr. Something Something's self-titled debut album are distributed by Festival and available in all major and well-sorted record stores across Canada, and internationally through CD Baby and dozens of other online outlets.