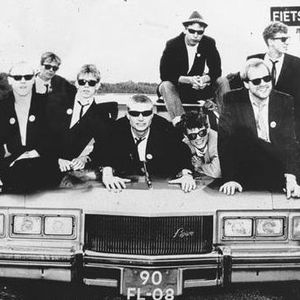 The ska-band ?Mr.Review' was formed in Amsterdam in 1983. Drummer Roel Ording and guitar player Arne Visser allready played together in a band when they met ?Dr. Rude'. The three of them shared an interest in ska and reggae music. For this reason they decided to join forces and start a new band. Pretty soon a keyboard player was found and Hans Hoffman on saxophone became the first brass player of the band. After a start when the band played some reggae too, they choose definately for ska.

The few covers were soon replaced by own songs, written by the guitar player Arne Visser who still writes the songs for the band.
After starting up in the pubs in the area, ?Mr.Review' signed a contract by the British ?Unicorn Records' in London. Later to be known as one of the worst ?rip-off' labels at the time existing. Anyway, the album ?Walking down Brentford road' was released and distributed world wide. Songs of this album appeared on several compilation albums and CDs.
At Brentford Road in Kingston, Jamaica the famous ?Studio One' was situated. This studio has been famous in the early days of ska music. All the great names have been recording there and for this reason ?Mr.Review' consider it as their musically roots.
Because of the debut album and the international compilations the band was asked for festivals in Holland, England, Germany, France and Belgium. With impressive shows the band build itself a reputation as one of the top bands in the new international ska-scene.
The band sound is a kind of mixture of melodic-ska flavoured by an impressivehorn section. The strong lyrics which are much more serious than should expext at first for a band in this kind of music are also due to the character of the band. It's not the intention tp preach, but ?some food for thought won't do no harm' in these turbulent days!
Early 1994 the second album was released: Lock, Stock and Barrel. Leading international zines called it ?probably the best ska-release of the year!' Again several songs appeared on a couple of compilation albums. And the band promoted the album with an European tour.
In July 1995 a vinyl 7? was released with a new studio recording of the song ?The street where I'm living'.
Now the first Live album of the band has seen the light of day! It's named: ?Keep the fire Burning' and it has been released on the German label ?Grover' in November 1995. Meanwhile all the earlier ?Mr.Review' releases are assembled on this label. Plans are made for a new period of touring. Even an American Tour.
The band ?s singer Dr. Rude and guitarist / composer Arne Visser got together to work on new song material in Amsterdam in 2001. It didn't take long to get a band together and hit the stage again! Their live set included some Mr. Review favourites as well as new songs, that refer to the unique Mr. Review style - well played uptempo ska with ear-catching melodies.
Rude & Visser a.k.a. Mr. Review definetely keep the fire burning!
There has been a silence since the last Rude & Visser mini album 'Red Rum' was released in 2004. The new album "XXV", released in 2010, contains 10 new songs and two bonus tracks. First reviews qualify it as: 'typical Mr. Review' and 'better than ever'!