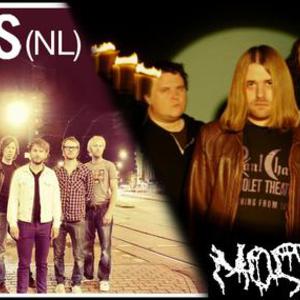 1)Moss is an indie band based in the Netherlands. Their own blend of rhythmic indie rock with vocal harmonies and a psychedelic side-note took an unexpected departure from their earlier sweet and enduring pop-songs. Up to date, they released three records on the Excelsior label and their songs have been featured on numerous compilations. In 2010 they won the VPRO 3voor12 Album of the Year Award for 'Never Be Scared/Don't Be A Hero'. Their last album is Ornaments released on 27 january 2012.

2)Formed in 2000, Moss is an occult doom metal band from the United Kingdom.
Signed to Rise Above Records (Europe) and Metal Blade (US/Canada), they have released 2 full length albums on vinyl and cd, and numerous eps, split recordings and demo tapes. Official facebook: http://www.facebook.com/mossdoomcult

6)Moss is an artist whom has remixed various IDM/minimal/ambient tracks.

7)Moss is Ngati Tuwharetoa whom has done various dub/downtempo songs.

8)Moss is an indie band from Finland releasing just a few songs on VA albums.

10)MOSS is a meeting of some of New York's most talented and diverse jazz singers - Theo Bleckmann, Peter Eldridge, Lauren Kinhan, Kate McGarry, and Luciana Souza. They unite their creative ideas and talents; presenting their original compositions and resetting them for five voices and trio. You are likely to hear standards, poetry, original music and spontaneous improvisation under one umbrella.
Peter Eldridge and Lauren Kinhan are members of the Grammy award winning New York Voices and also have their own solo projects of original music; Theo Bleckmann is one of the vocal magicians with Meredith Monk and his own genre-bending work; Kate McGarry has been gracing New Yorkers with her soulful timbre for many years; Luciana Souza is seen all over the world in all her incarnations, brazilian, jazz, and poetry inspired.
Moss is also used by two producers. The first did the mastering/mixing on The Dambuilders vinyl. The other is MoSS whom is a record producer primarily working in hip hop.

We Both Know The Rest Is Noise

Never Be Scared / Don't Be A Hero (Vinyl)

Life the World and the Universe