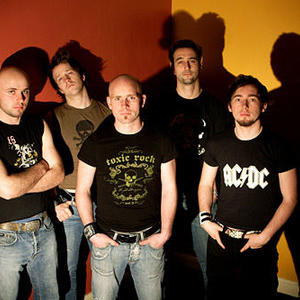 Formed in 1996 in London by Malcolm Cross. Mal had always written songs and played in bands (right back to his junior school gang 'The Bumbos') but Morello was his first attempt to lead and front one. Despite the cherry logo, Morello is actually a reference to his childhood hero, drummer Joe Morello (immortalised in the 1960 hit 'Take Five' with the Dave Brubeck Quartet.) First incarnation of the band included Chris Johnson (keys), Mike Gibbons (guitar), Steve Maud (bass), Steve Wyndham (drums) and Dave Pryce (percussion), later replaced by Matt McLaughlin.

Armed with the album and a stylish promo film for 'Insomniac Obsession' shot by PS Films (Paul and Sonia Carter) Mal begins doing the rounds of London's managers, bookers and record companies...to stony indifference. (Patience never was a strong point at this point in his career; 'Waiting for it to happen' and 'Still Waiting' are sample song titles from 'Jackpot'.) The gigs continue however, the live band now featuring Jon Thomas on bass and augmented by a horn section; Ben Edwards (trumpet) and Dave Temple (sax).

A new 'radio-friendly' recording of 'Still Got my Music' by Julian Cope producer Thighpaulsandra and a hilarious big band arrangement of the Vapors' 'Turning Japanese' (recorded by Tim Durham) still fail to open any doors for the band: it is a broke and utterly despondant Mal who heeds the call of his mates in Minibar (another aspiring London band) who had just scored a major record label deal in Los Angeles and needed a drummer (see minibarmusic.com for more on this story!) Fate had truly come a knockin'; it was with the support and blessing of his Morello bandmates that Mal planned the move, not without some conflicting emotions (sample song title from this period; 'I don't know which way is up.') After a series of tearful final shows and Mal's move stateside, Morello is put on ice.

Fast forward to 2003 and the independant release of 'Minimal.' Two years in the making, it is a loving musical tribute to Los Angeles, celebrating new experiences and friends found here. In a cool link with the past, among the guest musicians are original members of the London band; Jon Thomas, Dave Temple and Ben Edwards were all in LA holidaying or on tour in 2001. Other guests include members of Minibar, Gingersol, the Jukebox Junkies, NZ singer-songwriter Ben King, Cliff Wagner from the Old #7 and LA uber-scenester Pamela Des Barres. The title 'Minimal' refers both to the very basic means with which it was recorded - most of the record was cut and mixed on a portable 12-track HDR - and also acknowleges his proud membership of 'LA's finest little rock 'n' roll band' Minibar! (Cheers lads.)


Morello is also the name of a now defunct band from Leicester, UK.